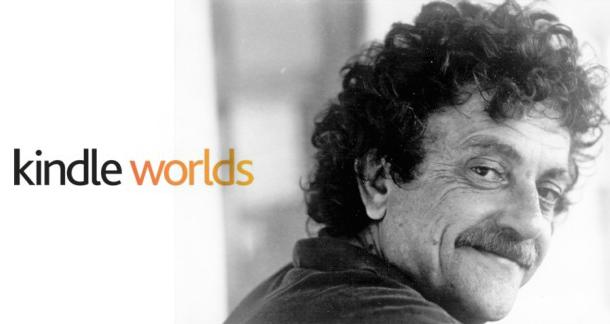 Kindle Worlds, the Amazon-regulated fanfic publishing site, added a big name to their list of licensed authors and properties: Kurt Vonnegut. According to GalleyCat's Jason Boog, all you Kilgore Trout hounds can self-publish your Vonnegut-inspired work sometime this month.

Kurt Vonnegut Trust trustee Donald C. Farber called the move “a natural extension of his legacy and a testament to the enduring popularity of his characters and stories. Billy Pilgrim, unstuck in time, is going to quickly become a Kindle Worlds favorite,” referring to the hero of Vonnegut’s classic novel, Slaughterhouse-Five.

I'm not sure about that "natural extension of his legacy" bit—I mean, being fanfic-able isn't exactly an accomplishment. I'm not being crass or judgmental toward fanfic writers, mind you, just pointing out that any author who achieves a significant following is likely to have someone out there writing fanfic based on their work. Just because it's officially licensed—and thus profitable—fanfic, does that really make it any different than someone's wholly nonprofitable Wordpress blog filled with chapters of a novel based on Breakfast of Champions?

I guess 50 Shades really did do a number on the publishing industry.

Is there much Vonnegut fan fic out there? I never really considered his work the type that would attract it.

Oh boy. Now we'll get stuff like "The Teenage Time-hopping Adventures of Billy the Pilgrim" or somesuch crap, with none of the wit and intelligence that spawned it.