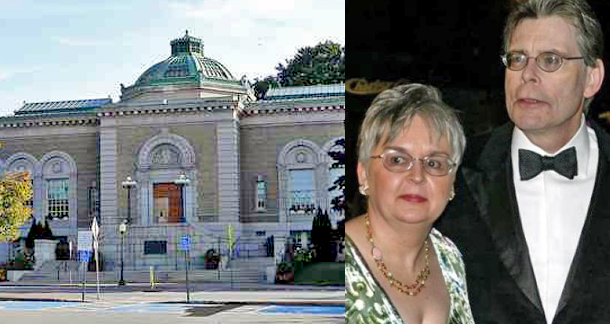 How cool is this? Stephen King and his wife Tabitha are big donators already, but this time I think they’ve topped themselves: they’ve agreed to chip in a third of the $9 million bill for the renovation of Bangor’s Public Library if the library can raise the money to cover the rest. Director Barbara McDade praised the Kings, saying

"They have just been wonderful supporters of the library.” When the library launched an $8.5 million fundraising effort toward a renovation and expansion wing in the mid-1990s, the Kings contributed $2.5 million. “They also replaced our front marble steps [six or seven years ago], which were worn to the point where they were dangerous,” McDade said.

After a number of leaks “threatened stacks of books and intricate plaster of Paris work and caused the Bangor Room’s ceiling to sink”, the library was informed that the existing copper roof was “beyond repair”, with the best option being a new, $3 million roof as well as work to the roof supports.

Residents of Bangor vote in June on a $3 million bond to fund the roof and a further $3 million is needed for work on upgrading the interior, creating more meeting space and improving security. The rest of the money would go towards contingencies, purchasing books and other items for the library, and to cover operating costs.

A funding drive called “Copper for Change” has been launched (by Stephen King’s radio stations) to help raise money for the Library, placing empty water jugs around the area to collect pennies and “will match whatever is raised up to $50,000”.

He’s one of my heroes anyway, but this sort of thing makes it even harder to hate King. And okay, he’s got plenty of money to do this sort of thing (some of it mine) but it’s good to see people who can putting money back into the communities. Should more authors do things like this? Well, the ones with money, anyway…

I think it's really great that King puts money back into his own community. I'd love to see people from all professions chipping in when they can to help their communities stay great. For me, that's usually $10-20, but for him it's significantly more. I think it's great.

I heard the news about the renovation of Bangor Library and they have large budget for the proposed renovation. It is better to start the renovations during summer season because it is the best time to do some remodeling.

Any renovation presents difficulties for a house owner or business owner But when the exact property is a traditional property, is found in a traditional district or possibly of some architectural relevance, renovation issues may seem too much to handle. Certainly, the individual in charge of upgrading historic as well as architecturally significant structures must take carefully.