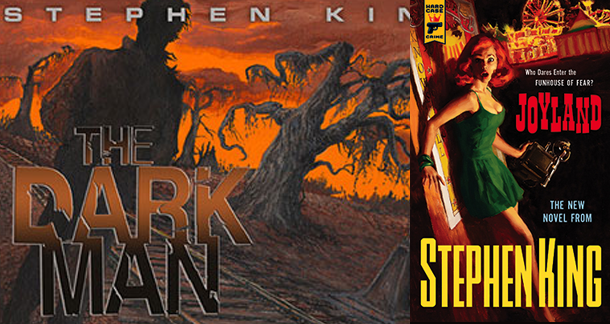 From the “for Pete's sake, make up your mind” and the “I'm beginning to think I can cure a rainy day!” categories: In 2000, Stephen King defied the publishing behemoth and released Riding the Bullet as an eBook for $2.50 (and I bought it). Now, he’s seen the light and is delaying the release of his new novel, Joyland, to encourage people to go to a brick-and-mortar store to buy it. And he seems quite adamant that it’s not going to happen.

"I have no plans for a digital version," Mr. King said. "Maybe at some point, but in the meantime, let people stir their sticks and go to an actual bookstore rather than a digital one."

So that’s that, then. If you want to read Joyland, set in a North Carolina amusement park, circa 1973, you’ll have to go to a store on June 4th… wait, nope, you can pre-order it on Amazon. How is that encouraging people to go to a real bookstore?

It’s also not the only thing he’s got coming out this year, with the sequel to The Shining, Doctor Sleep, due in August. If you can’t wait that long, you can order something he wrote in college: an 88 page “prequel” poem to The Stand, called The Dark Man — the first thing King wrote about Randall Flagg, the “antichrist” character from the book. It’s not often you can sell something you wrote when you were just starting to write, but he can.

Oh yeah, it’s also got “creepy illustrations” by one Glen Chadbourne, of decaying amusement park rides and other similarly gruesome topics. Starting price is $25 for a trade hardback, moving up to a staggering $1,750  for a signed edition printed in two colours that includes lots of extras including a small diamond, a personal servant, and a hi-res photo of Mr King’s butt. Okay, I made up those last three. But don’t worry if you can't afford it, that version has already sold out. (Recession? What recession?)

I don’t know, it does seem like he’s cashing in a bit. I’ll buy Joyland — hell, I’ll even go into a bookshop to get it — don’t get me wrong, but I’m not so sure I’ll be putting out for Dark Man or Doctor Sleep. What about you?

Out-of-Print Genre Books Are Expensive But Worth It

I think someone close to Mr. King needs to sit him down and explain some things in very clear, simple terms, because this is starting to sound like Crazy Old Man Who Irrationally Hates Technology behavior.

Print is dying. One author--even one mega-author--cannot single-handedly save it. Print won't die out completely, just like records and CDs didn't, but it will become a similar niche product for collectors and aging generations.

All King is doing with moves like this is pissing off people who actually want to read his work, not collect antiquated objects.

What makes me suspect King isn't thinking rationally is that he's trying to drive print sales, and it's highly unlikely that he's getting better royalties from print than from digital. So what exactly is he going to accomplish by funneling sales to print? Lining his publisher's pockets with more money. The bookstores will still fail and close. No one else is taking a cue from King's bizarre Luddite stance. In fact, the vast majority of bestselling authors are embracing digital.

This whole thing is just painful to watch. Also, poetry from King? The dude who was recently nominated for a Bad Sex in Fiction Award? I think I'll pass. I've got some Lorca to catch up on...

If I had busted my butt for so many years cranking out bestsellers, making enough money to buy my own town, I would probably get to a point where I didn't care if such-and-such was the best "business move." What current up-and-comers are doing with their e-books is pretty irrelevant to a special case such as King.

Dwayne from Cincinnati, Ohio (suburbs) is reading books that rotate to often to keep this updated May 21, 2013 - 1:29pm

"...or download a illegal copy. I guess you could do that too. But for the 500 people in America who really wanted a ebook but barely understand the tech or really respect copyrights, are still willing to buy it and leave the house they'll have too."

I can see both sides (King's and the consumer). I hear from customers, where is the Nook version? All day because of this decision. We're in a highly environmentally-conscious area which means sales of books are a only a quarter of daily sales. The majority being e-book sales from our wifi. Withholding epublishing doesn't increase our sales at all.
Overhearing the kids it seems that not providing an e-version only delays the pirates a few days while someone scans whatever it is then posts it online.
I personally haven't bought a physical book in 2 years, its just easier to carry around a reader rather than a clunky book these days. I can't carry 154 books but my ereader can and more. Not all of us born before the 60s shun new tech!