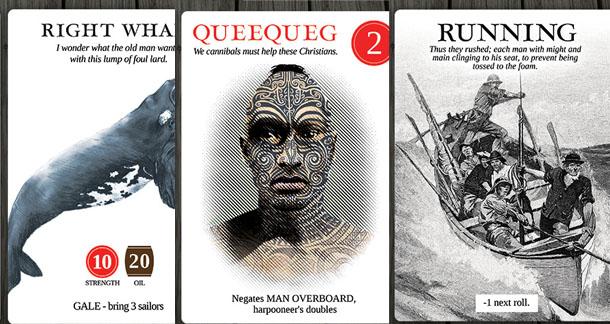 Of all the wildfire crowdfunding ventures I've seen, this one is the most surprising. King Post Productions set up a Kickstarter about a week ago to raise $25,000 for a Moby Dick-themed card game, fittingly called Moby Dick, or The Card Game (after the novel's original subtitle, The Whale).

Well, King Post made their goal. Really made it. As of this writing, the project boasted 1,645 backers and $62,312 in funding, well surpassing their original goal. And they still have 23 days to go.

This must be the greatest game ever invented. Let's turn to Melville House's Sal Robinson for a breakdown of the rules and gameplay:

Moby-Dick, or, The Card Game is a strategy game for two to four players, using three custom decks, the Sea, Sailor, and Whale Decks. The aim is to hunt whales for oil, signified by oil markers. To embark on it, players put together crews, made up of characters drawn strictly from the book, and then head out to encounter the trials and tribulations of the sea, culminating in a whale hunt, during which the whale (whose actions are spelled out in the Whale Deck) launches a number of counterattacks that the sailors must survive.

The intricate structure of the game is designed to produce different game-play narratives each time, and the focus is on surviving rather than winning. No one, it seems, comes away toting holds full of oil markers— you barely get out alive.

Sounds pretty cool, though I think the game's greatest appeal is the cards themselves, which are artistically slick. More from Robinson:

…many of the images come from the New Bedford Whaling Museum—old daguerrotypes, prints, whaling apparatus—and there are also original drawings from artist Havarah Zawoluk. Images are crosshatched so that they look like woodcuts, and each card contains a quote from the book.

What does everyone think? Is a Moby Dick card game THE must have item you've been waiting for all your life? Any other books that need the card or board game treatment?

The above image was cobbled together from some of the cards proposed for the game; check out the Kickstarter page to see more.

Joshua Chaplinsky from New York is reading a lot more during the quarantine May 7, 2013 - 11:38am

This is bad ass.

Received my game two days ago. Been playing with the wife. It's fun, but there's not much strategy involved, so avid role playing card game players might not like it. It's fun though, and what's wrong with fun?