A First Look at Jason Segel as David Foster Wallace 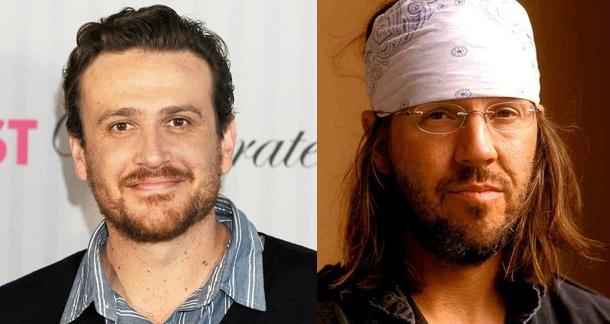 When it was announced that How I Met Your Mother star Jason Segel would play Infinite Jest author David Foster Wallace in a film adaptation of Rolling Stone editor David Lipsky's Although of Course You End Up Becoming Yourself, people were...well, perplexed seems like the correct word. The film in question, entitled The End of The Tour has started filming in the Mall of America, and Instagram user vaness246oh1 snapped a picture of Segel and co-star Jesse Eisenberg, who plays Lipsky, shooting a scene:

The result is...hmm...interesting to say the least. The costume hits all the right notes, with Wallace's ever present bandana and exceedingly casual fashion choices, but to me it looks just a little bit off. Segel as Wallace appears to be less of a transformation and more like it's just a really good Halloween costume.

To be fair, a hastily taken picture in bad lighting from a strange angle during a break between takes isn't exactly representative of the portrayal of Wallace in the film. In context, Segel could deliver an amazing performance of the lauded and tortured author.

So, what do you think? After seeing Segel as David Foster Wallace, do you think someone else could have done it better? Do you think Segel is perfect for the role?

Although Of Course You End Up Becoming Yourself: A Road Trip with David Foster Wallace

Your Halloween costume comment is spot on. I think it's the awkward pose he was caught in.

Ray Richards from Michigan and Iowa is reading The Great Shark Hunt by Hunter S. Thompson March 25, 2014 - 8:11am

I had no idea this was being made. I know he struggled with depression and got a ego boost that the math scholars attacked him for was dramatic but I didn't think they would make a movie out if it, ever.