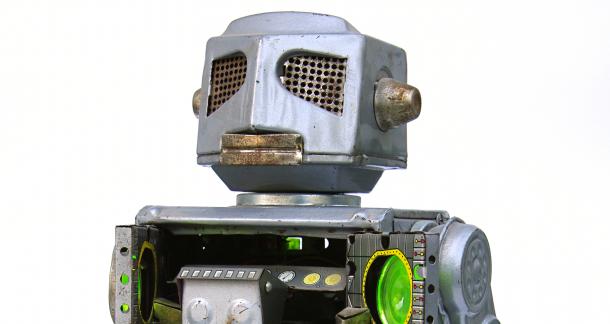 Ever heard of the The Nikkei Hoshi Shinichi Literary Award?

It's pretty close to your standard sci-fi book award but for one small difference. Submissions are accepted by "applicants who are not human beings (A.I. programs and others)."

Although this is the stated rule, 2016 marks the first time the judges were actually given A.I.-written novels.

Now, before you start burning your manuscripts and covering your body with dryer vent hosing to better imitate a robot, you should know that the A.I. novels were created 80% by humans, 20% by the A.I. The process involved the humans deciding the basic outline of the plot, gender of characters, stuff like that, and the A.I. selected from sentences and words provided by humans in order to construct the entirety of the text. Basically, the humans played James Patterson to the A.I.'s Liza Markland [or Rob Hart. Zing! -Jealous Editor]

However, the results were good enough that out of 1,450 entries, 11 of which had A.I. involvement, 1 book passed to the second stage of a 4-stage screening process. By the way, during this screening process, judges are not aware which books are written by machines and which by flimsy, dumb fleshbags.

I was surprised at the work because it was a well-structured novel. But there are still some problems [to overcome] to win the prize, such as character descriptions.

Want to read an excerpt from Konpyuta Ga Shosetsu Wo Kaku Hi (The Day a Computer Writes a Novel)? Of course you do.

I writhed with joy, which I experienced for the first time, and kept writing with excitement.

The day a computer wrote a novel. The computer, placing priority on the pursuit of its own joy, stopped working for humans.

Translated from Japanese, mind you.