Jane Austen to Appear on British Currency in 2017 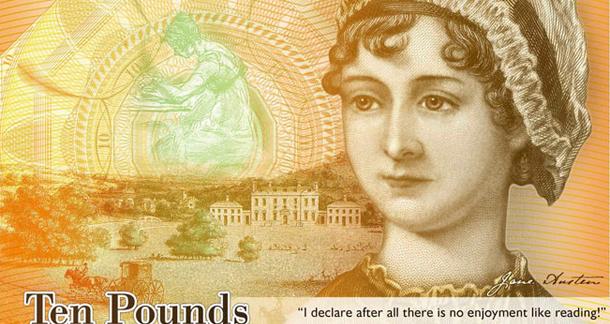 photo courtesy the Bank of England

Last week, the Bank of England announced that Jane Austen will appear on £10 notes sometime in 2017, The Guardian reports. Austen's impending portrait on British currency comes in the wake of three-month campaign to feature more women on bank notes, since only the Queen (obviously), Florence Nightingale, and prison reformer Elizabeth Fry have ever been included in the boy's money club.

The campaign began when the Bank of England announced they would remove Fry and replace her with Winston Churchill. Caroline Criado-Perez, co-founder of the blog The Women's Room, spearheaded a Change.org petition demanding the Bank diversify its currency. She also threatened to sue for discrimination, touting the 2010 Equality Act as her legal grounding.

The petition received 35,000 signatures. Not only this, MP Stella Creasy organized 46 Labour MPs to write letters to Prime Minister David Cameron in support of the cause. The Bank took notice, with Governor Mark Carney quickly announcing a sweeping overhaul on the historical figure selection process. Soon after that, he revealed Austen as the next ten-pounder. He said of their choice:

Jane Austen certainly merits a place in the select group of historical figures to appear on our banknotes. Her novels have an enduring and universal appeal and she is recognised as one of the greatest writers in English literature.

Criado-Perez was thrilled at the announcement:

Without this campaign, without the 35,000 people who signed our Change.org petition, the Bank of England would have unthinkingly airbrushed women out of history. We warmly welcome this move from the Bank and thank them for listening to us and taking such positive and emphatic steps to address our concerns.

To hear Jane Austen confirmed is fantastic, but to hear the process will be comprehensively reviewed is even better.

Not everyone is happy, however. Jennifer Schuessler of the New York Times ArtsBlog reports that University College London professor John Mullan wrote a blog post for the Guardian, in which he criticizes the quote selected to accompany Austen's image. Schuessler writes:

The words “I declare after all there is no enjoyment like reading!” Mr. Mullen pointed out, were actually spoken by Caroline Bingley, a minxy conniver who sidles up to Mr. Darcy in “Pride and Prejudice” and merely pretends to read a book to impress him.  “Duplicated many million times on the bank note will be a line in praise of reading that, comically, could only be used by someone who didn’t mean a word of it,” Mr. Mullan wrote. “Time for a campaign to use a different quotation?”

What does everyone think—is Jane Austen a good fit for British currency? What other prominent female figures—literary or otherwise—would you select?

Emma: The Feminist Hero I Never Knew She Was