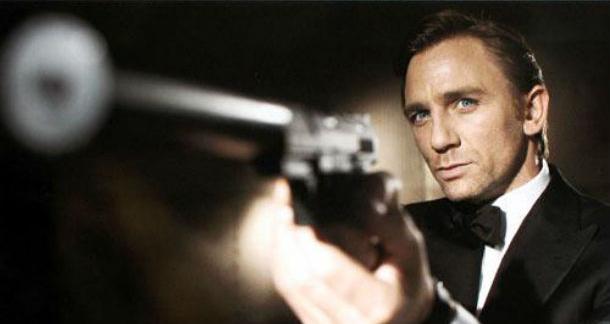 Ian Fleming's super-spy James Bond celebrates the 50th anniversary of his first appearance on film this week (Dr. No, the first Bond film, released in 1962). To celebrate, 007 just got two harsh reality checks.

First, astrophysicist Neil deGrasse Tyson spoke to NPR about whether Bond's gadgets and weapons are realistic. The answer: sort of, but kinda no? For example, it's possible to create a ring that would emit a frequency high enough to break glass. But a watch that could create a magnetic field to deflect bullets? Said Tyson:

"I was younger at the time, of course, as was everyone who's watching it — but I knew that bullets are made of lead. Lead is not magnetic. So you're not deflecting bullets with your magnetic device. I'm sorry — all right, if bullets were made of nickel or cobalt or iron, yeah, then maybe it could do something. But no! I'm sorry. ... I didn't give him that one. I said, 'Nope, you messed up there.' "

If you are into science, you will be all over this. Check it out here.

Then, there was an article about Bond's sex life. Comparisons of the films and various studies show that Bond is sexist, a man-whore, and also probably riddled with STDs.

"The likelihood of James Bond having chlamydia is extremely high," says Dr Sarah Jarvis, a general practitioner and regular guest on the BBC's The One Show. "If he came to my clinic I would definitely advise him to have an STI test."

Check out that article here.

Castration Anxiety and the Monstrous-Feminine in 'Thor: Ragnarok'

Yeah...Tyson is an astrophysicist, not an ammo guy.  The cheapest, most widely available ammo is typically FMJ, which is usually covered in some sort of nickel alloy.  Nickel is of the few ferromagnetic elements (meaning it can be used to make a magnet), which means it would be highly manipulable by magnetic field.  Power requirements are another issue, and probably disqualifying, but the fact is that bullets are not made of 100% lead.  Many don't have lead in them at all.

Flemmig is a good place to start for writers who want to write action-thrillers because he's pretty spartan with his prose.

My favorite Bond story is "Quantum of Solace" because it has no action at all. It features Bond sitting on a couch listened to the governor tell him a story about the woman who'd sat at their table that night.

It was such a nice piece of blog. I really like the topics you posted here. The contents are all very informative. I gather many information with this and it helps me a lot. Thank you and keep on posting more blogs.