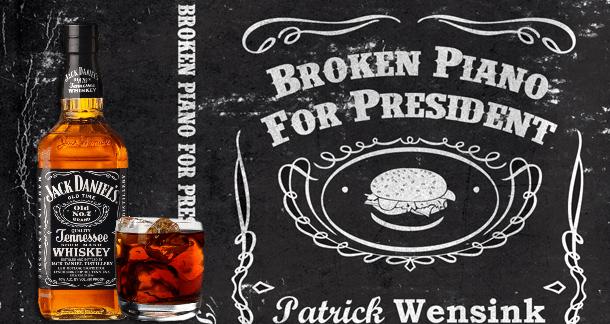 Looks like friend of the site and author at large Patrick Wensink is going to have to change that handsome cover art for Broken Piano For President. This saddens me because I quite liked the book. Not only that, but Patrick is a nice guy, and I feel like my enjoyment of Broken Piano redeems the souless critic in me that wrote this Sex Dungeon For Sale review, which Patrick still maintains he appreciated for its honesty (and I still maintain wasn't that negative).

Anyways, Patrick doesn't seemed too perturbed by this development, as the boys over at JD legal have been ever-so-pleasant about the whole thing. You can read the world's most tender cease and desist letter HERE, Patrick's thoughts on the matter HERE, and his official statement to LitReactor HERE. On the site. Below.

We will be changing the cover art for Broken Piano for President, regrettably. However, Jack Daniel's possesses the booze industry's most polite legal team. They actually offered to help pay for new artwork. Lazy Fascist Press is proudly independent, though, and will not be taking any of that sweet, sweet, corporate whiskey money. Consider the old cover a collector's item.

All I know is I got me one of them collectory covers, and if you want one, you'd better hurry over to Amazon (via our handy link below, so we can capitalize on Patrick's misfortune) and grab one. Besides being a great looking book by a fantastic smelling author, Broken Piano also happens to be the (self-proclaimed) greatest political allegory since Animal Farm.

Looks like Patrick's misfortune has turned into a PR windfall. This shits gone viral (probably because it's booze related) and the added awareness that comes with internet stardom has rocketed Broken Piano For President up the Amazon sales chart. It's even been covered by the New York Times. But remember kids, you heard it here first. We were the ones who broke the story, and those bastards didn't even credit us! Anyways, congratulations, Patrick. It couldn't have happened to a nicer smelling guy.

Class Director
Rob from New York City is reading at a fast enough pace it would be cumbersome to update this July 19, 2012 - 10:05am

Ordered. Only 10 left in stock!

That C&D letter is beautiful.

The fact that they offered to help pay for new covers, for a fellow Louisvillian... what gentlemen.