Is ePublishing The Next Bubble Industry? 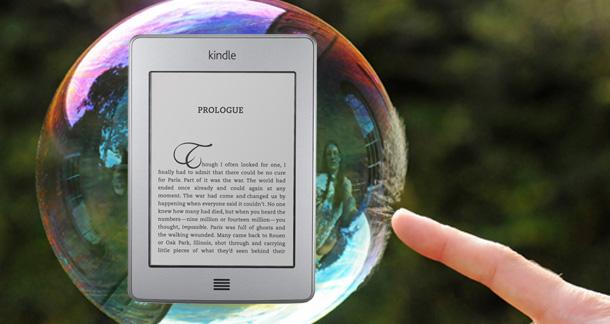 Scottish writer Ewan Morrison has a lengthy piece up at The Guardian, about how ePublishing is the next bubble industry, and it's only a matter of time before it bursts.

Over the past few months we've been watching the eBook industry explode. It's a subject we keep coming back to here on the news page, because this is a watershed moment for the publishing industry. Paradigms are shifting and we get to watch it happen. Exciting times!

But the direction the industry is taking, he says, is not sustainable. His argument is well-researched and incredibly interesting (as opposed to some people, who say things just to say them).

The gist of Morrison's argument is that self-publishing is the next dot-com bubble: There's money to be made, so people are climbing over each other to post eBooks on Amazon so they can start raking in their fortune. Except that's not going to happen, and eventually the flood of first-timers testing the self-publishing waters is going to subside.

Like the fact that some of the self-publishing poster children (Amanda Hocking being a good example) have used their success to procure traditional publishing deals.

And how sometimes it seems like there's more money to be made in teaching writers how to self-publish (i.e., a lot of self-publishing advocates aren't selling salvation, they're selling their own brand).

Morrison allows that he could be wrong--and so do I. But it's hard to disagree with a lot of what he said. Go check out his article, then come back here and tell us what you think in the comments.

(Further reading: Author Libby Hellman wrote a really good blog post about how Amazon is turning eBook shoppers into bargain hunters who will stop paying for books in favor of ones they can get during free promotions. More valid points.)

Is e-pub the next bubble industry? No, not e-publishing. Self-publishing and e-pub seem to be used interchangeably in this article, which makes me question the author's knowledge of the subject. Obviously the self-pub boom will level itself out in time, but that isn't going to hurt e-pub or have much effect on the economy. The fact that the author compares this leveling out to the dot-com bubble is ridiculous. Self publishing threatens to leave many who invested their time into writing with nothing to show for it. Though that may suck for them, it is nothing compared to the thousands of investors who put up millions of dollars only to lose it all when the dot-com bubble burst. What's happening right now with Barnes and Noble, and the like, has little to do with the flooding of self-publishers and a lot to do with companies that didn't have the foresight to see where the technology was going. The publishing industry is undergoing a major transformation and there is no going back from here. Those who ignore that fact will become extinct fast.