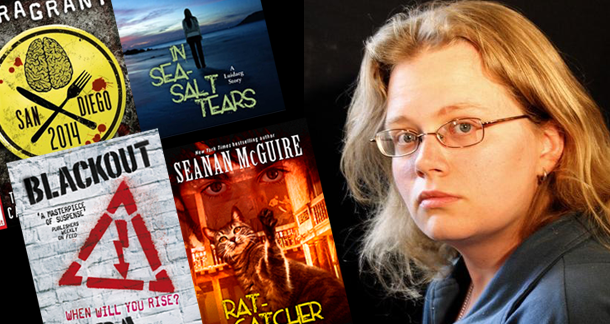 Nominees for this year’s Hugo Awards, science fiction’s most prestigious award, were announced simultaneously on Saturday at four conventions and via a number of online channels. But that’s not the big news: author Seanan McGuire has set a new record by being shortlisted five times in the awards.

That’s a lot. She posted her reaction on her blog admitting she’d “cried a lot” after hearing about her nominations.

Those of you with keen eyes may have noticed my name a time or two… I am grateful and honoured and terrified and fragile and amazed, because this ballot represents the best of 2012 in a very concrete way. I see so many works there that blew my mind, and I look forward to experiencing the rest. Thank you so much. I will try very hard not to let you down.

And she’s in good company, with other nominees for best novel including John Scalzi’s Redshirts, Kim Stanley Robinson’s 2312 and Lois McMaster Bujold’s Captain Vorpatril's Alliance. If she wins, she’ll join a group which includes Arthur C Clarke, Ursula K LeGuin and Isaac Asimov. Winners won’t be announced until the 1st of September, which will give a lot of the members of the World Science Fiction Society (and the rest of us) time to read all the entries.

It’s interesting to see so many nominations for one writer, but is it just a coincidence or a product of the modern publishing environment?

Just curious as to what you mean by modern publishing environment. Can you provide a bit of context? Is she self publishing?

Courtney from the Midwest is reading Monkey: A Journey to the West and a thousand college textbooks April 1, 2013 - 8:00pm

So, yeah, I think it's a result of that. Kudos to her, though, for being capable of that much work.

Hey Courtney thanks for responding. I was thinking it might have something to do with self-publishing, but I wasn't quite seeing the connection. I was thinking that self-publishing might make it harder to be noticed for awards like to Hugos. Like maybe, perhaps, it happened in spite of the modern publishing environment as opposed to because of it.