How Can Eggers Have Plagiarized a Book He’s Never Read? 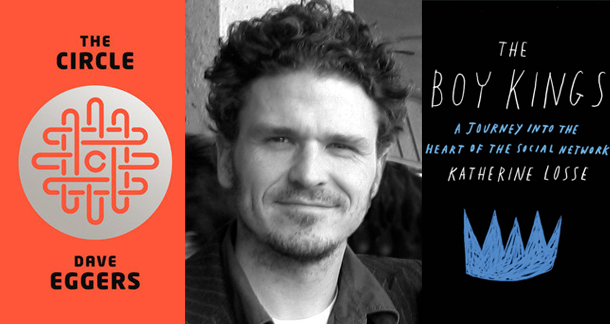 Dave Eggers has done a lot of things over the years, including starting a (somewhat eccentric) publishing house and writing a best-selling memoir modestly titled A Heartbreaking Work of Staggering Genius. But plagiarism? I find that hard to believe. Still, last Month Kate Losse, author of The Boy Kings, accused him of rewriting her book for his new novel, The Circle.

In September, Losse wrote that "Dave Eggers decided to rewrite my book as his own novel about a young woman working her way up through Facebook,” in a post on Medium. She followed it up with an annotated excerpt highlighting the similarities between her work and Eggers’.

Now, that’s a serious charge, but I suppose not unfounded in an age where schools and universities use programs to check a student’s work for similarities to already published works, a side-effect none of us really imagined in the early days of the internet. Of course Eggers has denied it, stating “not only has he never read Losse’s novel, but that he didn’t read any novel to research for his work of satire”. Gawker’s Nitasha Tiku read both books and gave this analysis:

In previous books, where Eggers has “borrowed” the voices a Sudanese child soldier and a Katrina survivor, he’s made his sources very clear and I have no reason to doubt the statement he provided to us in this case. (I also don’t buy Losse’s claim that Mae Holland’s name shares the same “phonetic structure” as hers and I think she undermines her case by repeating that.) Reading the books in succession, I didn’t notice any outright plagiarism, but many instances of thematic overlap: There are the all-hands meetings every Friday where Zuckerberg makes vague, quasi-philosophical motivational speeches, although that’s common startup behavior. Then there’s the way Losse’s colleagues made her perform on Facebook’s nascent Video product, an episode magnified in The Circle. But the skepticism that pervades The Boy Kings is nowhere to be found in Mae Holland, and any critical thoughts articulated about the company’s mission are voiced through other characters.

So, plagiarism? It doesn’t sound like it and Tiku was particularly cutting when she called it “less The Jungle 2.0 than a pivoted relaunch of The Firm”. Ouch. I think that hurts more than the accusations of stealing another author’s work. Of course, the cynical me is asking myself if it’s just a ploy by Losse to raise the profile of her book? There’s no such thing as bad publicity, as they say.

The Circle is released on Tuesday, 8 October.

More importantly, how seriously should we take a charge of plagiarism by someone who admits she hasn't read the book she claims was plagiarized from her work? I say "not at all seriously", and further assert such an act marks her as either a desperate publicity hound or a paranoid wackjob. Either way, she deserves no more of our time or attention.

Gerd Duerner from Germany is reading Rebecca of Sunnybrook Farm October 5, 2013 - 9:54am

Actually, I don't read a outright "he plagiarized my work" accusation by Katherine in her post, she does however point out quite correctly the similarities between her work and his. And this does beg the question, if he hasn't as he claims read anything on facebook's history and, I presume, hasn't worked for them at the given time, where exactly do these similarities come from?


It's naturally possible that his retelling of facebook history is simply build on somebody’s experiences that do closely resemble hers - but well, in this time and age where stealing other's intellectual property seems to become customary it's only natural to be wary of such coincidences occurring.

Banz from Brisbane is reading Neverwhere by Neil Gaiman October 6, 2013 - 1:59am

Given that Dave Eggers has apperently admitted when he has drawn from other people's published work it would seem odd that he chose not in this case - had he read The Boy Kings.  That's not to say it didn't happen as Kate Losse claims, just that it would be inconsistent with his past behaviour.

I have heard it said elsewhere that if Kate Losse's book is a memoir (i.e. factual) then there's nothing really to stop Dave Eggers from basing his work on what has actually happened.  There are many, many books which are fictionalized accounts of real events.

Finally, if two people write books about the same subject then there are bound to be similarities. Anyone writing about an Internet startup is going to have stuff in there about free soda, Xbox/foosball, non-standard meetings, etc.

I haven't read much Eggars, and I don't know who Losse is aside from this -- so no dog in this race. I'd just like to point out that if I had rewritten someone's work and passed it off as my own, I'd say I hadn't read the work... I mean, come on.