He Who Is Down One Day Can Be Up The Next: Researchers Seek Cervantes' Remains 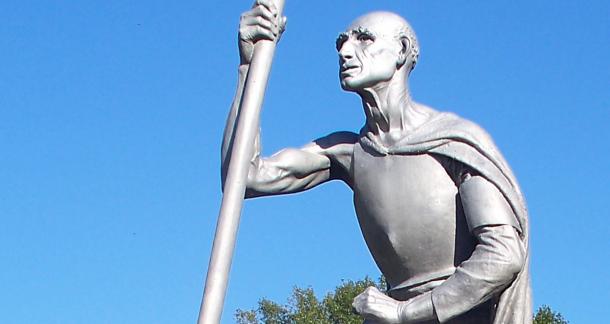 Researchers in Spain believe they have located the remains of Miguel de Cervantes, author of Don Quixote and other works.

After using infrared cameras, 3D scanners, and ground-penetrating radar, researchers in Madrid believe they've located an underground crypt where the remains of the author are likely to be held.

Should remains be found, researchers expect they will be easy to identify, as they would show evidence of three musket ball wounds Cervantes sustained in The Battle of Lepanto in 1571. Though he had a fever at the time of the battle, Cervantes refused to stay out of the fray. He ended up taking two shots to the chest and one to his left arm, a blow that rendered his left hand useless.

Cervantes requested burial at the Trinitarian church and had strong ties there. The Trinitarians helped Cervantes' parents raise a ransom to free him from pirates after he was captured and spent 5 years as a slave in Algiers, during which time he made 4 escape attempts.

An official historian and part of the research team, Fernando Prado has said the goal behind discovering Cervantes' remains is to create a literary landmark for tourism.

At this point, the team has to get permission from 13 cloistered nuns who live on the premises before exhuming any remains.

Is it ever a good idea to exhume a corpse? Is it justified in giving the living a place to honor a beloved figure?