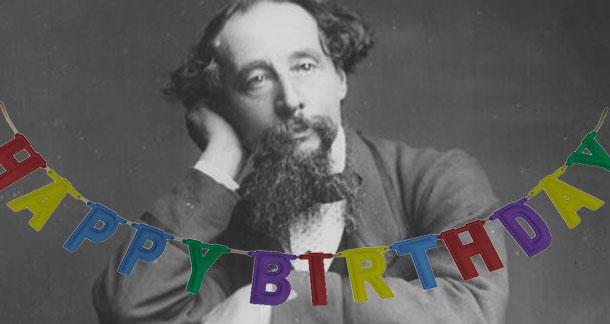 Today the world celebrates the 200th birthday of Charles Dickens, the writer of such masterworks as Oliver Twist and Great Expectations, and probably the first modern "celebrity author."

Do you want to learn more about Dickens? Here's a good place to start.

Do you want to get in on the fun? Then head over to Dickens 2012, which has a list of events taking place around the world, from Zurich to New York to London to Dickens' birthplace, in Portsmouth, UK.

Are you going to do anything to mark the occasion today? If so, head down to the comments and tell us. If not, tell us about your favorite Dickens book.

Taylor from Durango, Colorado but living in Portland, Oregon is reading The Paradox Hotel by Rob Hart February 7, 2012 - 4:41pm

As anyone who's read my columns knows, I do like Charles Dickens. As a high schooler, I thought he was crap, but later as I reread his stuff as an adult, and learned more about him, I saw what a fantastic writer he was and how adept at his craft he was. I think all writers should give him a chance (or a second chance at least). He wrote about some pretty dark stuff well before that was part of our everyday literature. I mean, in Oliver Twist, both the villan and his loyal canine are hung from the side of a building as they try to escape. In Bleak House, a guy spontaneously combusts, leaving his gooey, uh, remains all over his junk shop; bodies are buried one of top of another, and the gravediggers litterally jump up and down on the bodies to get them all to fit.

Don't let Disney fool you, Dickens loved to write about the underbelly of society, and he frequently walked the ghettos of London to get a true sense of the real degradation that existed all around him. He wrote about sex, murder, racism, biggotry, prostitution on a regular basis. And he did it during the height of the stuffy Victorian era. Ya gotta give him credit for that.

Joshua Chaplinsky from New York is reading a lot more during the quarantine February 7, 2012 - 4:56pm

He's also rumored to have been a low-ranking literary jerk.

He'd be remembered if he only wrote "A Christmas Carol"...no minor masterwork, that.