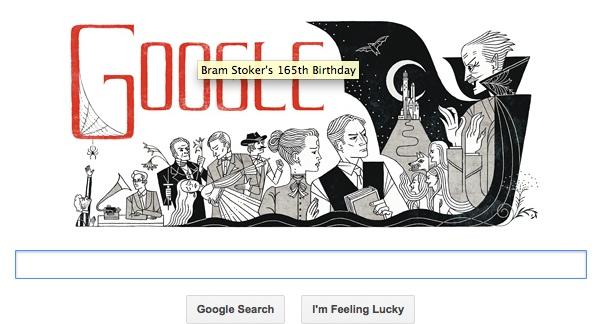 It's hard not to wonder whether Bram Stoker, the creator of the modern vampire, would be rolling over in his grave if he could see the sparkly, hunky blood suckers that dominate popular culture in 2012. If you like your immortals a little more gothic, take a peek at Google today. Today's Google Doodle celebrates what would have been the Irish author's 165th birthday (in the year that marks the 100th anniversary of his death) with an illustration featuring spiders, bats, and the king of all vampires as well as references to some of Stoker's lesser known novels, such as Egyptian mummy tale The Jewel Of Seven Stars.

Bram (short for Abraham) Stoker's legacy is so tied to his classic vampire tale that many people don't realize he wrote eleven other novels. And his name is so closely associated with horror (the Horror Writers Association's prestigious Bram Stoker Awards honor excellence in the genre) that most people would be shocked to know that he started off as a romance novelist. It's the perfect day to explore some of his other writings. Galleycat has rounded up some links where you can find free digital versions of several of Stoker's books and stories.

If you're a serious fan who has already read all Stoker's books and stories, perhaps you would be interested in buying the desk where he wrote Dracula. It's for sale, along with a matching candelabra, and is expected to fetch between $60,000 and $80,000.

Have you read any of his non-Dracula stories or books?

As a Romanian, I'm not completely sure I want to celebrate the birth of bizarro Vlad the Impaler, given that Bram Stoker has given Romania its biggest claim to fame, but that has little to do with history or reality. So, a healf-hearted happy anniversary from me.