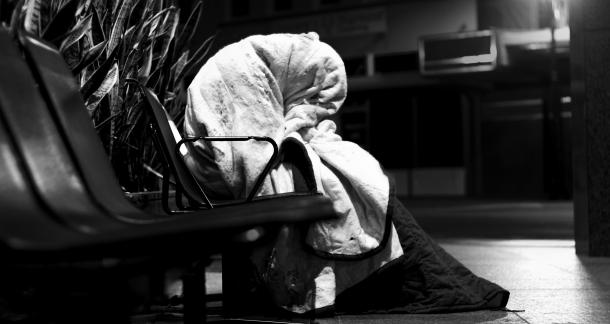 NPR recently reported on San Francisco Library's main branch and some of the more bizarre behavior displayed by its users. Outside the normal sights of homeless camped out for the day and bathing in the sink, recent incidents included a man hitting another man with a chair and a man who was asked to leave the library after urinating on books. Twice.

Not just an urban issue, a Burlington, VT library is installing locks on its restroom doors after the toilets were clogged with hypodermic needles and other drug paraphernalia. For the third time.

It brings up the important question of what's right for libraries and the people who use them.

On the one hand, incidents like these make it difficult for some users to avail themselves of library resources. On the other, many, many of the homeless and other patrons aren't necessarily doing anything wrong. Bill Cochran of Billings Public Library, another system that sees its fair share of homeless, puts it this way:

[the homeless] are entitled to be here, unless their conduct takes them away from here. If they are low-income, or their appearance is such, it doesn’t necessarily mean their conduct is bad. For years we have separated appearance from conduct. We are all entitled as citizens to be in the library.

Indeed, the San Francisco Public Library has decided to deal with issues head-on, being the first library in the United States to hire a full-time social worker.

What's right for your library? What would you like to see when you walk in the doors?

Christina Re from the United States is reading something a friend wrote April 25, 2014 - 9:21am

I've never seen homeless folks in my public library, but they should have the right to go there. I think the real issue is when any patron is excessively loitering or acting Inappropriately. But there are a lot of benefits to be found at libraries, free access to the internet and obviously educational tools.

We get homeless people in my local library all the time and they're always welcome.

I've been working in libraries for about four years now, so I've dealt with my fair share of homeless folk. Most of them are amicable enough, but I've had to deal with the violent and abusive minority as well. Same rules should apply to the homeless as to anyone, you're welcome as long as you behave yourself. So no threatening or fighting customers or staff, no vandalizing property, no passing out drunk with a bunch of boiled eggs in the kid's area.

Dwayne from Cincinnati, Ohio (suburbs) is reading books that rotate to often to keep this updated April 25, 2014 - 3:04pm

Here our libraries have become defacto segregated between the homeless and everyone else.  One downtown (oddly, the nice one) is almost all homeless to the point they look at me funny when I go.  I don't go anymore, I didn't like that many people looking at me like I was a jerk for walking in.  The other ones are out toward the edges of town require a car to get to them, so you don't see many homeless people at them.

I spend quite a bit of time in my public library and i know who the homeless people are in there when I see them, but I rarely see them misbehave, so I believe they should always be welcome and respected as patrons unless an incident happens, which should be dealt with in the same manner any other patron would be. I have also been homeless and spent much of that time in the library, but I am also a high functioning bum who most people wouldn't label as homeless by appearance, and I spent much of that time on the computer there looking for a job and place to live. I also still checked out good books there while being homeless. I'm friends with some of the librarians in my town and I can tell they are somewhat put-off by the homeless in the library, and hearing about the SF library with a social worker makes me think my library should at least offer an informational booth/area for them to find help that's available in town.