Geek Out With Fellow Book Nerds At Wordstock 2011 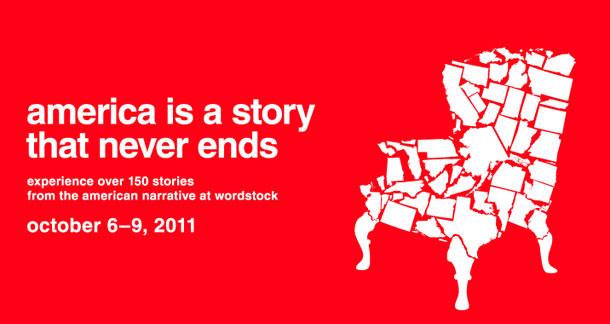 Attention Portlandians and traveling bibliophiles!  Wordstock 2011 is almost upon us!

What is Wordstock, you ask? Only one of the largest literary festivals in these United States. It's like a brainier version of Woodstock, hopefully with less hippies. I'd better let them explain:

Wordstock is an annual festival of books, writers, and storytelling in Portland, Oregon. To date it has hosted over 1,000 writers, who have read and performed for nearly 80,000 people at past festivals. Wordstock features nine author stages; a book fair with over 125 exhibitors; a special children’s activity area and children’s literature stage; a series of workshops for emerging writers; over a week’s worth of special events hosted by our partner organizations throughout the region, including a special broadcast of Live Wire!, the popular public radio variety show that features writers from the festival; and more.

This years festival takes place October 6th through October 9th. Certain events are already sold out, but tickets for the book fair portion of the festival are still available. A one-day pass is a reasonable $7, while a two-day pass will set you back a sawbuck. This year's list of over 100 attending authors includes Chelsea Cain, Monica Drake, Jennifer Egan, Ursula K. LeGuin, Colin Meloy of The Decemberists, Michael Ondaatje, and Lidia Yuknavitch. There will also be a screening of slam poetry documentary, To Be Heard, as well as The Life and Times of Allen Ginsberg.

If this sounds like your idea of a good time, head on over to http://www.wordstockfestival.com/ to purchase tickets.

Chester Pane from Portland, Oregon is reading The Brief and Wondrous Life of Oscar Wao by Junot Diaz October 4, 2011 - 2:21am

but bring your blotter

and your tender fodder.

For a small city, this is a big festival and anyone interested in the written word will find plenty to love about it! I should know, I am on the marketing team for Wordstock. Besides seeing big name authors in a relatively small setting, Wordstock has workshops galore and hundreds of exhibitors--companies who support literacy and love books as much as we do.

This is my first festival and first year in Portland, but in the seven states that I have lived, I have never seen anything even come close to what this festival offers.

And if hanging with a bunch of word nerds isn't enough, the festival is just once peice of Wordstock's year-long mission to provide writing education to students, teachers, and writers through a series of workshops and writer/teacher pairings to enrich the lives of young writers, too.

I can't be happier to be a part of something that does so much for the community. If you are in P-town this weekend, you really shouldn't miss it. Read on!

Joshua Chaplinsky from New York is reading a lot more during the quarantine October 4, 2011 - 10:57am

Thanks for chiming in, Taylor. Sounds awesome!

Chester Pane from Portland, Oregon is reading The Brief and Wondrous Life of Oscar Wao by Junot Diaz October 10, 2011 - 6:55pm

More details on Wordstock events can be found here. Bring your ink and blotter.