From Page To Screen: Galactus, The Great Gatsby and The Gunslinger 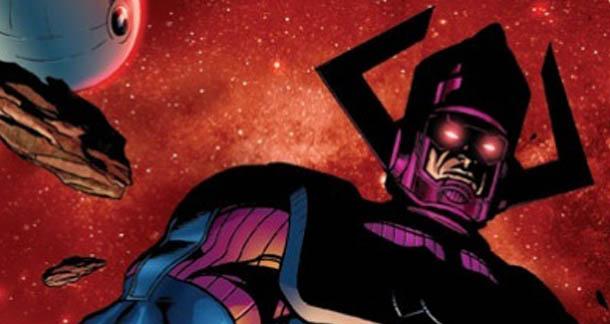 Where does Hollywood get most of its ideas? Books and comics! Here's your kinda-daily roundup of book-related projects headed to a screen near you.

Galactus may try to devour Earth in the next Avengers movie! (The Avengers will probably stop him though.)

The Fantastic Four and Daredevil are owned by Fox, and Galactus--a world-devouring purple alien--is part of the Fantastic Four films. But Marvel's film guru Kevin Feige has reportedly struck a deal to bring the character over to their sandbox. This is very much in line with the galactic angle they're pushing for in the next Avengers film. In exchange, Sony gets to hold on to Daredevil for a little while longer.

And it seems as though Joe Carnahan, of The Grey and The A-Team, might be directing the Daredevil film. A decent enough choice, right? This puts into question his remake of 1974's Death Wish, a film starring Charles Bronson and loosely based on the novel by Brian Garfield (quite a good novel, by the way). [Badass Digest]

Warner Bros. is pushing Baz Luhrmann's adaptation of The Great Gatsby from Dec. 25 to summer 2013. The studio claims it's because they want to reach a wider audience. It could be that the movie is a complete mess. Who knows? I think it looks fabulous. [The Hollywood Reporter]

The long-gestating adaptation of Stephen King's The Dark Tower series is showing signs of life. Akiva Goldsman is reportedly about to deliver a new script for the project, which director Ron Howard and producers Brian Grazer and Goldsman have conceived of as multi-format, playing out through films and television. Javier Bardem was being considered for the role of Roland Deschain, but it looks like he's out--and maybe Russell Crowe is in? I like Russell Crowe. He seems nice. Good for the role? You tell me. I haven't even read the books. [Deadline]

Any of this stuff get your juices flowin'? Discuss!

Javiar Bardem is horrible for Roland. I have always thought that Hugh Jackman would be perfect for the role, especially since the books sometimes travel backwards with Roland - taking him through his history. The actor would need to be rugged, sexy and able to play someone both old and young.

Timothy Olyphant may also be a good choice, looks-wise, but I don't believe in his skill as an actor. Do you really think he can play a Gunslinger? He's so modern.

Timothy Olyphant was awesome in Deadwood. He'd definitely be my first pick for Roland, too.

I really hope they sell Galactus as the incredible threat that he is. Their attempt in the Earth's Mightiest Heroes cartoon fell far short of the mark.

Timothy Olyphant may also be a good choice, looks-wise, but I don't believe in his skill as an actor. Do you really think he can play a Gunslinger? He's so modern.

I think rugged for Roland is good, and distant, someone who can convey some internal battle going on.  How's about Mads Mikkelsen?

Olyphant was so good in Deadwood that it's hard to see anyone else playing Roland.  Plus, they would need someone younger for Gunslinger that can be 'aged' for Drawing of the Three.  Too bad Val Kilmer is old and fat now.  He was a great Doc Holliday.

A medal for that man with the Olyphant suggestion; he'd be perfect. As for Crow, no thanks. He was awful in that film with Sharon Stone as a gunslinger (i forget the name, it was terrible).

Screw all this Roland talk. What about Eddie? I'm going with Tom Hardy. Discuss.

EDIT: And screw TDKR. I'm basing my opinion solely on his back-to-back tortured Stuart Shorter one year, then Michael Peterson/Charles Bronson the next.

Clint Eastwood 30 years ago would have been the only perfect fit. Anyone else is going to be a compromise. It's all a matter of how much of a compromise that will be. I don't mind the idea of Daniel Craig. Russell Crowe? It could be worse. Hugh Jackman? Absolutely not.

I'd like to see a lesser known actor play Roland. I'm a fan of Timothy Olyphant but I'd rather someone who isn't already so closely associated with a western role. The Mads Mikkelsen suggestion is interesting although he may be a little too creepy. I've seen suggestions of Viggo Mortensen (I'm a fan but not sold), Javier Bardem (I think he's all wrong), and Jim Caviezel (too pretty, not tough enough). Clive Owen, Aaron Eckhart, Wes Bentley (kinda young, maybe better for Eddie), Josh Holloway, and Paul Bettany crossed my mind.

Really like the Bettany suggestion.  I always saw Roland as quite gaunt and Bettany has the physique and intensity to carry that off.

In regards to the Mikkelsen aspect, I always pictured Roland as being a little creepy - maybe not in his younger training days, but certainly in books 1 and 3.  He warms up a little towards the end of the series though.  Although I would have to suggest casting Mikkelsen slightly against type and allow him to have two fully working eyes.

What about Alexander Skarsgard?

Crowe has that cool, gritty attitude for the role, but I must say,  Michael Fassbender wouldn't be such a bad choose either.