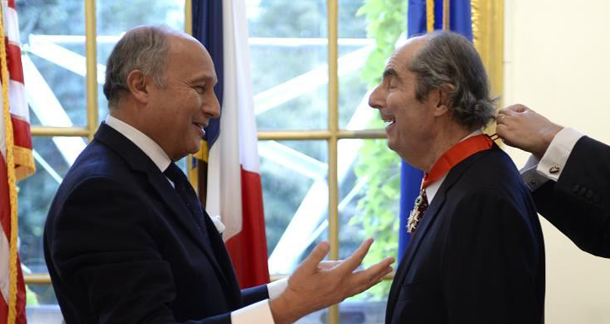 Philip Roth may be retired, but his contributions to the literary world are still being recognized. On Friday, French Foreign minister Laurent Fabius presented him with the Commandeur de l'Ordre de la Légion d'Honneur, or the Commander of the Legion of Honor, at a ceremony in New York at the French Embassy. Roth has had ties to France for a long time, not least because his first short story was published in The Paris Review.

Fabius praised Roth for his 'art of storytelling, your irony and self-depreciation, which is not typically French,' he said. 'You have enjoyed immense success in France.' Fabius spoke of Roth’s place on the literary map, sitting next to great French writers like Celine and foreign writers who have been influenced by French literature such as Dostoevsky. 'You have always enjoyed confusing the public…blurring the lines between fiction and reality,' said Fabius to Roth.

Created by Napoleon Bonaparte in 1802, the Legion of Honor was intended as “a reward to commend civilians and soldiers”. Normally, membership of the Legion is reserved for French citizens, but it is sometimes awarded to “foreign nationals who have served France or the ideals it upholds”.

'This highest honor is a wonderful surprise,' Roth said. Then, speaking in French, he said that he was 'absolutely delighted.' Roth accepted the award explaining the long influence that France played in his life. French was the first foreign language that he had studied. Though he never did master spoken French, French fiction played an important role in Roth’s life. He taught comparative literature for many years.

Fabius concluded by saying: “France is giving you back what you have given to my country.” Is it deserved? I’d say so.