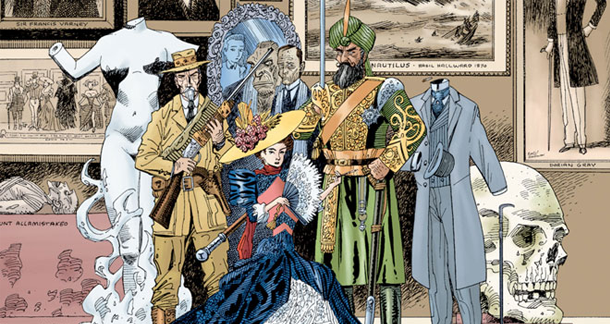 Here’s some news to warm up your summer: Kevin O’Neill and Alan Moore’s popular graphic novel series, The League of Extraordinary Gentlemen, has been given a “put pilot” commitment by Fox to bring the series to a TV near you. Basically, that means they’re committing to a pilot — meaning they’ve “already agreed to air it, screenplay unseen, or else incur penalties”. A series will obviously depend on how well that does.

Michael Green (Green Lantern, Kings, The River, Heroes, Smallville) will serve as writer and executive producer and, should the project go to series, showrunner. 3 Arts' Erwin Stoff (The Matrix, Kings) will also executive produce. Neither Moore nor O'Neill will be producers on the series.

This isn’t the first comic of Moore’s to be adapted for viewing, or the first version of The League of Extraordinary Gentlemen, if you remember the flawed movie starring Sean Connery. There have also been big screen adaptations of Watchmen and V for Vendetta. Commentators are already wondering how it’s going to work, as the series is not an easy one to read.

"League is not something that is going to appeal to the lowest common denominator of TV viewer; the series assumes a level of cultural literacy on the part of its readers that just isn’t present,” said Jess Nevins, who wrote volumes of the aforementioned annotations for the graphic novel series. “League is in most respects a satire of Victorian English attitudes—towards ethnicity, sex, adventure fiction itself, and so on—and that type of satire and sensibility won’t do well on American TV screens without alteration. (Just as the British Office had to be Americanized to succeed here).”

Nevins doesn’t think this means it’s destined to fail, but thinks they’ve got their work cut out for them. As a fan of Moore’s work, I’m always interested to see how it gets interpreted. Will an adaptation of League…  work? I guess we’ll just have to wait and see what they come up with.

Wasn't the main problem with the movie adaptation that they tried to make it more relatable to American audiences? Nevermind that it was also in every other way terrible? I don't really have a clue what they are thinking with this.