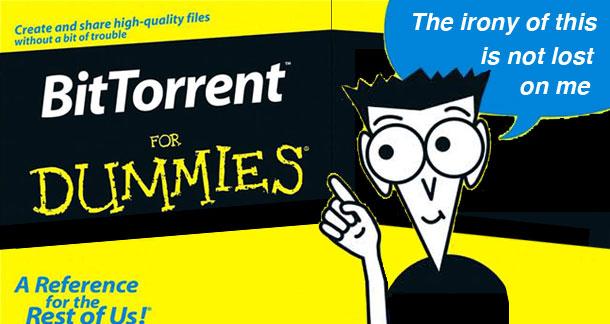 Do you have a pirated copy of Drive, or the newest Bibi Jones (NSFW) scene ripped from the hardworking folks over at Digital Playground?  Is your download manager packed with movies and music that you didn't pay for, stuff that hasn't even been released?

For instance: Photoshop CS 5 All-In-One for Dummies has clocked in over 74,000 illegal downloads since June of last year, and that's just one title out of many.

As you've probably already surmised, the ratio is a bit off.  27 BitTorrent users out of many thousands is a drop in the ocean, and this lawsuit is all predicated upon whether or not they can actually get these people into court.  Currently, all they have to go off of is the IP addresses, and an IP address is pretty damn easy to change.  Also, if these BitTorrent users actually wind up in court, exactly how much monetary compensation does the publisher realistically expect?  If they were too cheap to fork over $20, logic indicates these aren't the kind of people who have stockpiles of cash just hanging out in the bank account.

I agree with John Wiley and Sons on this.  There eventually comes a point when you have to put your foot down on an issue, and even though it's only 27 people, this lawsuit appears to be more about making a statement than making a profit back.  You can check out the legal filing in PDF by clicking HERE.

Let's get some dialogue going in the comments.  Is the publisher in the right?  What's your take on BitTorrents?

Five Legal Issues All Writers Need To Be Aware Of

Five More Legal Issues All Writers Need To Be Aware Of: Rights, Royalties, Negotiating and more

Joshua Chaplinsky from New York is reading Stories of YOUR Life November 3, 2011 - 5:54am

You think anyone's actually downloaded BitTorrent For Dummies via BitTorrent?

We know what Scott Ian of Anthrax would say: take away their internet.