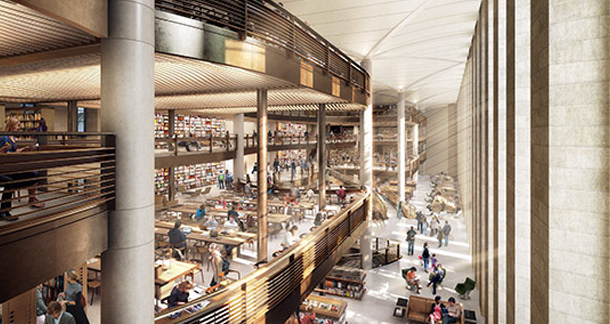 We’ve all seen it in movies. Well, mainly the reading room on the third floor and the lions in front of the building, but most of us have an image of New York’s iconic Fifth Avenue Research Library somewhere in our head. An image that is about to change. Because plans are afoot to renovate and expand the building, making it the largest indoor public space in the city.

Foster + Partners from the UK have been given the job of designing the refit and expansion, with a budget of some $300 million to spend. Norman Foster has been behind some large projects combining traditional buildings with new designs, like the Hearst Tower (New York) and the atrium between the National Portrait Gallery and the Smithsonian (Washington, D.C.) - so he knows what he’s doing.

'It would be unthinkable to play around with those spaces which are so wonderfully intact and have become venerated, hallowed, over time and are steeped in history,' Mr. Foster said in a telephone interview. 'This is not an attempt to mimic that design, but to respect it.'

While the expansion plans will create a building that overlooks Bryant Park behind, it will also open up some of the existing building to the public for the first time in years, converting second floor storage rooms and offices into work space to accommodate about 300 scholars, researchers, and writers. An expanded children’s room, below-ground education spaces, as well as enlarged book storage under the building and a new center for teenagers are also part of the plans. The project is expected to be finished by 2018.

What do you think of the plans? Don’t worry, the main reading room on the third floor will be left untouched.