'Fahrenheit 451' Finally Published As An eBook 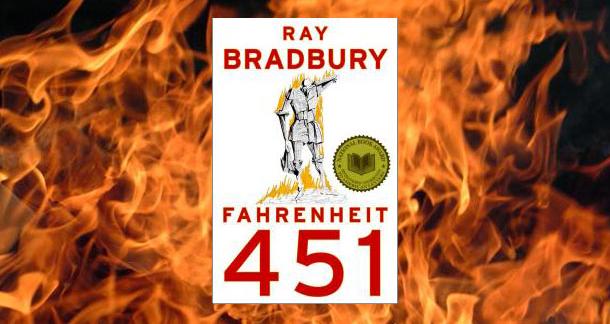 Via The Associated Press:

Fahrenheit 451, Ray Bradbury's novel about a dystopian future where books are banned and burned, has been released as an eBook.

Is this a paradox? Maybe!

Simon & Schuster released it yesterday at the industry-standard price of $9.99 after getting Bradbury's blessing. It probably wasn't easy. From the AP:

Bradbury himself has been an emphatic defender of traditional paper texts, saying that eBooks "smell like burned fuel" and calling the Internet nothing but "a big distraction."

Bradbury hasn't commented on the story yet, but his agent, Michael Congdon, said the rights for the book were expiring, and given the reach of the digital market, a "new contract wouldn't be possible without eBook rights." Congdon said Bradbury understood and gave his blessing.

Fahrenheit 451 was first published by Ballantine in 1953, and then as a hardcover by Simon & Schuster in the 1960s. It's sold more that 10 million copies, and is my most favorite novel of all time. I own two editions but I'm going to buy the eBook on principle. Reading this book on my iPad will probably tear a hole in the space-time continuum.

For those of you unfamiliar with the story, I'm not going to summarize it. Go read it right now. It's brilliant.

Joshua Chaplinsky from New York is reading a lot more during the quarantine November 30, 2011 - 10:45am

So... once it became a matter of money, he caved?

Just kidding. Although a bit weird, I don't seen anything inherently wrong with this. As long as books are available, it doesn't matter what form they take. eReaders are like the modern day analog of people memorizing bits of books so they aren't lost.

Class Director
Rob from New York City is reading at a fast enough pace it would be cumbersome to update this November 30, 2011 - 12:30pm

I am not afraid of a world where every single book ever published is available instantly, at the click of a button. I think that's something to look forward to.

as long as we have hard copy backups... Digital technology has moments of fragility that my hardcovers volumes do not (although neither survives at 451F)

How can a science fiction author complain that the internet is "not real?"

At least in this form this book can't be burned...