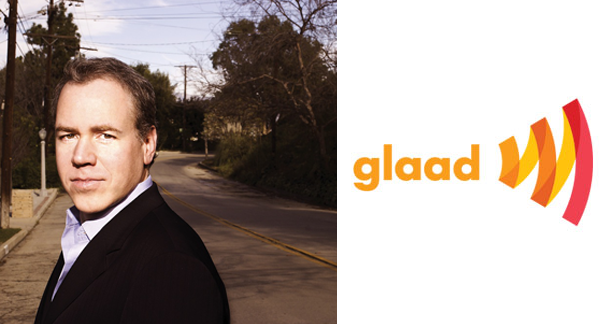 Bret Easton Ellis seems to be making a habit of upsetting people. He’s done it again, upsetting LGBT activist group GLAAD with his comments about how the recent coming out of Jason Collins, the basketball star, was handled by the media.

Ellis wrote a “lengthy diatribe” for Out magazine claiming Collins was treated like a "kind of baby panda who needed to be honored and praised and consoled and – yes – infantilized”. He goes on to accuse GLAAD of imposing a “sanitized and sanctified vision of homosexuality upon the complicated lives of ordinary gay people”.

"An organization holding an awards ceremony that they think represents all gays and also feels that they can choose which gays can and cannot be a member of the party is, on the fact of it, ridiculous. The fact remains that if you aren't presenting yourself as a happy homosexual promoting healthy mainstream gay values and pimping for GLAAD, then you're somehow defaming The Cause," he writes.

GLAAD has hit back, of course, and Rich Ferraro said:

"Given the crude remarks he's made about the gay community and people living with HIV/Aids, this publicity stunt is not surprising. GLAAD asked for a time to sit down with Bret and planned to invite other leaders in the gay community as well as the HIV/Aids community. I hoped to share with Bret information about GLAAD's actual advocacy work and mission since he does not appear up to speed on it."

Part of the problem started in April when Ellis had been invited to take part in “the GLAAD media awards”, but the group withdrew the offer after seeing some of the comments on his Twitter feed. He now claims he’s “been criticized for being a self-hating homosexual, but says though he may be self-hating, it has nothing to do with being gay”.

It’s not the first time he’s had a run-in with a person or organisation, and I doubt it will be the last. Is he right? Or is this just another case of Ellis shooting his mouth off?

Political Correctness is out of control in this country as always. It especially poses a certain degree of threat for a writer (but then again said writer could use that to their advantage). I'm glad Bret's making these kinds of comments. A lot of bullshit slips through the cracks in America and so few people ever call it out.

On the one hand, it's kind of like calling out PBS for not representing people who are into collectible card games.

On the other hand, I don't really know what he's talking about.

I read about him being denied entry to the GLAAD awards and actually went back through his twitter feed to see if I could spot anything particularly awful. He's weird, he posts weird things, and sometimes he's offensive, but I don't see how he's an enemy to their cause.

I don't really get what his beef with the treatment of Jason Collins is, but to be fair I only read the excerpt here, so it may be present in the full article.

Joshua Chaplinsky from New York is reading a lot more during the quarantine May 16, 2013 - 5:32am

He does have a point. GLAAD is basically a PR firm trying to project a certain image. But Ellis is also a world class shit-stirrer.

Dwayne from Cincinnati, Ohio (suburbs) is reading books that rotate to often to keep this updated May 16, 2013 - 11:18am

I for one like this guy's non fiction writing. Seems like he is trying to be honest.

To an extent, he has a point. When a sports star or other high-profile person of interest comes out as gay/abused/what-have-you, they are treated as courageous and a massiah of their culture. The fact that they get all of this press because of the fact that they come out as gay instead of, I don't know, being a basketball star is somewhat pathetic. I don't care if a person is gay, because I believe in equality. That is the equalizing factor: a person's sexual orientation not being an issue. The media is making it an issue. And, in a way, infantalizing it. But Ellis is being abrasive, almost for the sake of being abrasive.

Well, grouping people who are are survivors of abuse with gay people?  WTF is up with that type of thinking? You are implying the groups are synonymous.  Many survivors of abuse suffer from various forms of mental illness -- not their fault, but a result of the abuse they've endured.  It seems you are suggesting being gay is a form of mental illness.

The fact is, things aren't equal and people often still take a lot of heat for coming out. If GLAAD can manage to help someone do that with dignity, then what's the problem?

One can't help but wonder if Ellis is resentful that he didn't have similar support -- also, that it's a professional athlete coming out as opposed to an intellectual (in his own mind) type.  I wasn't even aware that he was gay, but given that information, what has he done in the way of establishing a positive role model for the LGBT community? And yes, I do think public figures have some responsibility to that end. His book was made into a movie about a guy who cuts women up with chainsaws.  Doesn't that in some way reinforce the stereotype of gay persons hating all members of the opposite sex?  Don't tell me that's a character in his book and not him. Many authors simply use their main characters as alter-egos. (Not all, but some)  I'd keep the two separate if he could.

Perhaps he's resentful that he didn't get this kind of support and a bit envious of the attention, so he's resorting to a very infantile coping mechanism -- negative attention.

Dwayne from Cincinnati, Ohio (suburbs) is reading books that rotate to often to keep this updated May 26, 2013 - 6:54am

@flaminga - Couldn't it just be that he wants people to be treated as people, not all cut from the same mold cut outs?

I actually read the full article awhile back and he has some really good points. And I understand his issue now. He isn't saying the gay community doesn't need role models, he is saying that the role models shouldn't all fit the same mold, and that there are a lot of gay men that are unrepresented because of the way gay is treated in the media. It's a fair point.

Further, Flaminga, I think it's very strange to equate his work with him. He's written mostly straight male characters, and his range of topics is actually relatively broad. The idea that if a writer makes a character with bad qualities, that they must share them is a little abhorrent to me. If I write a rape scene does that mean I think rape is cool? If I write about a drug addict, does that make me an addict? Because I've written both and I can assure you that I am anti-rape and have never been addicted to anything aside from cigarettes and caffeiene. The Patrick Bateman character kills a large number of prostitutes, if you've done any research on serial killers, you'd see that represents true life, and probably isn't a result of Ellis thinking women need to be cut up with chainsaws.

Dwayne from Cincinnati, Ohio (suburbs) is reading books that rotate to often to keep this updated June 5, 2013 - 5:11pm

Wouldn't it be neat if that was true and we did pick up the flaws of our characters? I'd start with writing about a guy who was to trusting with his billions he made solving homelessness was swindled out of 90% and had to struggle by on a few hundred million. Then I'd go for the guy who invented warp travel, but couldn't hang out with the peaceful aliens because his name was a curse word in their language.

@Renee - Ellis seems like the type who might be in favor of cutting specific women he thinks are really horrible people, but he'd have a really good argument for why they deserved it.