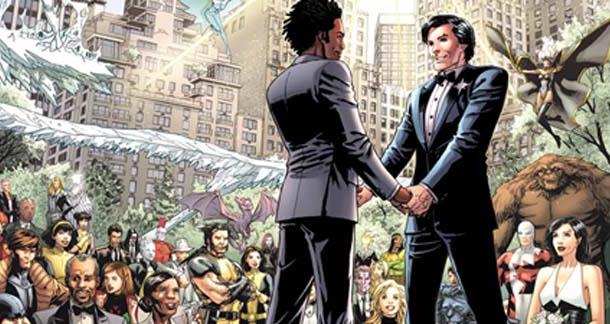 Now that President Obama has endorsed same-sex marriage, all bets are off--both Marvel and DC Comics are planning gay-themed events this summer.

On June 20, in Astonishing X-Men #51, Northstar will marry his boyfriend Kyle Jinadu. Northstar was originally a member of Canadian super-team Alpha Flight, and came out as gay in 1992.

This isn't the first time comic books have gotten gay-friendly. Numerous characters are gay, lesbian or transgendered. And back in 2002, Apollo and Midnighter were married in The Authority, published by DC's Wildstorm imprint. But this is still significant, since this isn't an imprint or alternate universe--it's one of the two top publishers featuring a gay marriage in one of its biggest titles.

Meanwhile, DC plans to out one of its established superheroes soon. No word yet on who it is, though Galleycat reports speculation pointing to Batman. Though I think that's bullshit of the highest order. It's a daring, exciting idea (and one I'd love to see, because, oh, the pandemonium in the geek community), but it's Batman. I doubt DC would risk shaking up their universe that much. Expect it to be a second-tier character like Booster Gold or Blue Beetle.

So, what do you think? Is this as a marketing ploy to take advantage of the political climate, or an important step toward normalizing the concept of same-sex marriage? Is it OK for it to be a little of both?

How Did Comics Become a Social and Political Battleground?

I think it might be a little bit of both because, let's be honest, they are both STILL businesses, after all. And that's ok because they're still getting a positive message about basic human civil rights out to a very wide audience.

I say bravo to both Marvel and DC.

Unlikely that the gay character coming out at DC will be Batman as Batman writer Scott Snyder has said that it's not a character we've seen yet in the new DCU - and even confirmed that it's not Bruce. So unless he's trying to throw people off, it's going to be someone else.

There's a good thread here on trying to figure out who it is:

Class Director
Rob from New York City is reading at a fast enough pace it would be cumbersome to update this May 24, 2012 - 9:26am

Thanks for the confirmation! I feel like a lot of people guess Batman because Batman is probably the only DC character they know outside Superman, and Superman has Lois Lane, so he can't be gay.

@Rob: Yeah, I think that's pretty accurate - that for most people Batman and Superman are the default DC superheroes. Of course in the new DCU Superman and Lois Lane are no longer together so who knows!?

Storytelling wise, this would be a good opportunity for DC and Marvel to make an instant villain by showing an established character's disapproval.

Dwayne from Cincinnati, Ohio (suburbs) is reading books that rotate to often to keep this updated May 24, 2012 - 12:05pm

I'd be a lot more interested if they made a variety of prominent gay/bi characters. If they presented them as a spectrum with some heroes, some villains, some support, and some "yeah powers are great, but I don't have any so that doesn't help me sell pizza so have fun unless you are here to buy a slice" it would make the settings in question a lot more diverse. No pun intended.