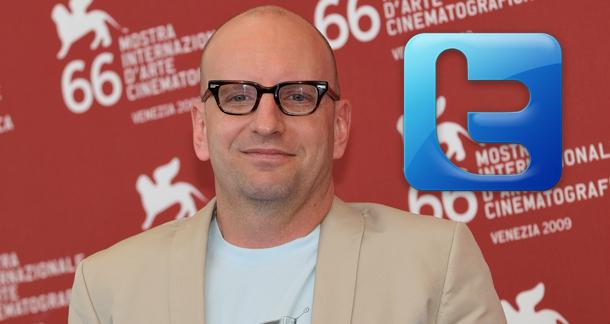 Steven Soderbergh, the supposedly retired director of Traffic, Schizopolis, and all those Oceans movies, has dipped his toes into a new kind of storytelling: fiction writing. The Hollywood Reporter reports that filmmaker has penned a serial novella titled Glue and self-published the work through his ghost Twitter account @Bitchuation. Written in second person and featuring accompanying photographs, Soderbergh has already released the first seven chapters, with more no doubt soon to come. Let's take a look at the first few lines, shall we?

It was difficult for you not to assume the worst after the way your funeral went down. The whole thing seemed like a parody of itself.

Like anything else, the #&%# was only valuable because everyone wanted it and nobody had it.

You’ve become the receptacle for everything forgotten, and an impulse can only be ignored for so long before people begin to wonder.

The aforementioned Hollywood Reporter article features the first seven chapters arranged in sequence, so if you dislike reading bottom to top, check it out there. And of course, you can follow @Bitchuation for updates to the story.

Any fans of Soderbergh happy to see his swan song won't be Magic Mike?

Has anyone ever written a first person novel composed entirely from a character's twitter tweets? That would be cool. Otherwise just writing a novel on twitter doesn't make sense to me. Seems like that's been done a lot.

If I had the attention span (or perhaps lack thereof) to deal with that, then I wouldn't be reading paper books.

Isn't Soderbergh the one whose secret Twitter account was outted because he promoted his own stuff a little too hard on there?

I like the guy, he's funny and has a cool artistic style. Really enjoyed Side Effects more than I thought I would. I don't entirely buy the directorial retirement, but I'll keep tabs on the novella anyway.

Joshua Chaplinsky from New York is reading a lot more during the quarantine May 1, 2013 - 6:23am

Soderbergh is one of the smartest directors out there. His recent State of Cinema address at the San Fran Film Fest is a must watch.