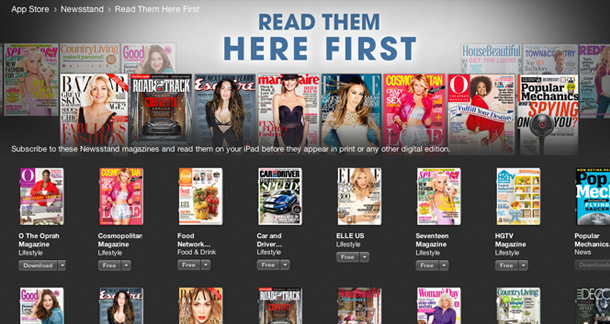 In a 21st Century market, more and more content is going digital. A prime example is Newsweek, which became a digital-only magazine at the start of the year. The revolution continues with magazine publisher Hearst becoming Apple’s first partner in “Read Them Here First”, a new program giving iPad users first access to publications via the Newsstand.

With 22 titles now available, including O the Oprah Magazine, Good Housekeeping and Esquire, Hearst is a pioneer in the “early digital window” arena, although there are hints Hollywood is interested in the idea for selling movies online.

...the length of Newsstand buyers’ headstart varies, depending on publication, and that the offer applies to single copy sales as well as subs. As far as the deal’s origins: “Apple suggested this initiative, and it’s a great offer they can provide to their newsstand users. We’re always working with our retail partners on unique ways to drive consumer sale and engagement.”

But what effects are digital magazines having on the industry? Digital may provide additional revenue streams through new subscribers and it may help them hold onto existing readers. But that doesn’t mean it’s going to bolster an industry which, like newspapers, is already feeling the pressure from the internet.

What about you? Do you subscribe to online magazines? I have to say I don’t — but that’s mainly because I don’t read any particular periodical on a regular basis and I’m not convinced the value add is enough for me to shell out for it (it hasn’t yet, anyway).

leahzero from Chicago is reading everything Fitzgerald wrote. January 22, 2013 - 10:43am

People still read magazines? Didn't we pretty much destroy this market when we invented the smartphone?