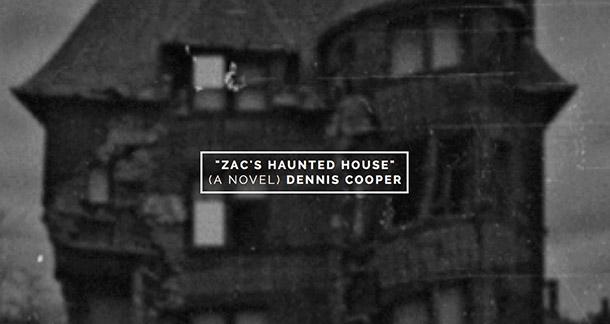 Dennis Cooper, author of the George Miles cycle and numerous other mind-bending works, has broken the cool people's internet. He has written a novel composed entirely of animated GIFs. Zac's Haunted House is available for free download and can be viewed online at Kiddiepunk.com. It is weird and unsettling and highly imaginative. But don't take my word for it. Here's what dennis-cooper.net had to say:

Dennis Cooper’s tenth novel bears all of the earmarks of his legendary and controversial work — intricate formal and stylistic play, disturbing content, an exploration of the borderline between fantasy and reality, concern for the emotions and dilemmas of youth, etc. — but it is both something unique in his body of writing and possibly something of a world’s first in the novel genre itself... "Zac’s Haunted House" is as fun and eerie to explore as its namesake attraction, and, the more closely one searches and decodes its carefully detailed sequences and construction, a deep and fraught fiction puzzle.

Go check it out and let us know what you think. Genius? Or tedium?

I "read" the first chapter. It sort of felt like tumblr.

Are the pancakes a reference to something?

He has written a novel composed entirely of animated GIFs.

Using GIFs from other things to "write" a story?  Neither genius nor tedium.  If he's trying to pass this off as an original work (and even more mind-boggling, a literary work), I consider that plageristic.  I understand LitReactor covering this, but the fact that it's being presented as something credible in a literary sense is a little aggrivating to me.

Cooper could at least make his own images - or work with an illustrator to do so - and actually write a story, like a graphic novel in GIF form.  That would be fascinating.  I have to wonder if this isn't some social experiment/performance art attempt, just seeing how people respond to it.