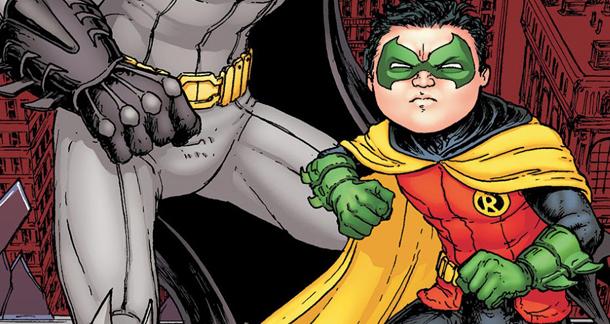 One more warning, and then I'll move ahead... There are spoilers! in this article. Continue at your own risk.

Okay, now that's out of the way, it is with heavy hearts (or not-so-heavy, depending on who you're asking) that we report the untimely death of Batman's long-time sidekick, Robin, in the latest issue of Batman Incorporated.

An offshoot narrative of sorts, Batman Incorporated follows Bruce Wayne's efforts to spread his crime-fighting agenda via a global network of like-minded vigilantes. In this series, Wayne's 10 year-old son fought as Robin alongside his father. According to the New York Post, Robin perishes in a battle against a "hulking assassin who happens to be, in true comic-book form, a 'brother' cloned from his genetic material." Batman races to his aid, but fails to make it in time.

In many ways this has been Damian’s story as much as it has been the story of Bruce Wayne and it’s a story that had its end planned a long time ago - for what son could ever hope to replace a father like Batman, who never dies?

Damian is not the first incarnation of The Boy Wonder to bite the big one. In 1988, Jason Todd—successor to original Robin Dick Grayson—was beaten to death by the Joker after fans voted the much-disliked character out of the comics.

Who here will miss Damian? Happy to see him go? Let's hear your thoughts.

I don't know if I'd call it a bold move - anytime you give an established story to Grant Morrison, you can be sure that he'll kill off beloved and longstanding characters, and generally make an interesting mess of things.

May he rest in peace now and until the time he is ressurected, retconned, cloned, or otherwise needed for marketing purposes, Amen.

Only three deaths in comics are permanent: Thomas and Martha Wayne, and Unlce Ben. http://johngaltfla.com/wordpress/wp-content/uploads/2011/08/unclebens_jp...

R.I.P: A Word on the Death of Robin