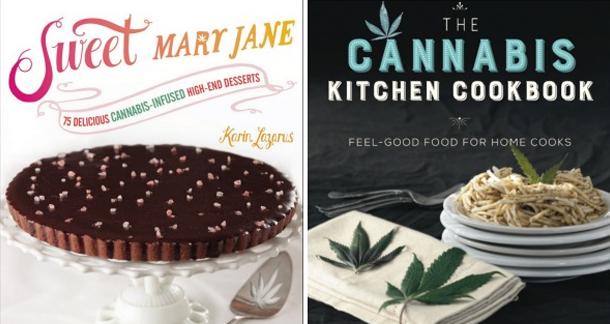 Now legal in 23 states as well as the District of Columbia, marijuana seems to be a rising business trend—so much so that Forbes has referred to legal cannabis as this year’s “best startup opportunity.” The literary industry is now joining the party, as evidenced by the two mainstream cannabis cookbooks coming out this year, reports Publisher’s Weekly.

Karin Lazarus, who has been deemed the “Martha Stewart of weed baking” by New York Magazine, is the owner of a trendy medical marijuana edibles store in Boulder, Colorado. Soon her new cookbook, Sweet Mary Jane: 75 Delicious Cannabis-Infused High-End Desserts, will be available to readers everywhere (due out from Avery this June).

“…as far as we know, Sweet Mary Jane is the first major effort by one of the Big Five publishing houses to publish a high-end cannabis cookbook that takes the subject of baking with medical marijuana seriously and provides real, gourmet baking recipes,” stated Gigi Campo, Avery associate editor.

The cookbook not only includes such drool-worthy recipes as Smashing Pumpkin White Chocolate-Pumpkin Bars, Mad Batter Chocolate Chip Coffee Cake, and Pot Tarts, but it also covers legality concerns and other issues cannabis cooks might need to know.

Lazarus’ foray into the unchartered territory of mainstream marijuana cookbooks isn’t a solitary excursion. The Cannabis Kitchen Cookbook: Feel-Good Food for Home Cooks by Robyn Griggs Lawrence will hit shelves in September, courtesy of Skyhorse Publishing. Griggs’ book includes recipes from chefs all over the country, and includes some pretty enticing eats within its pages—Crab and Mahi Mahi Sliders with Cannabis, Turmeric and Garlic Sauce, and Wild Mushroom, Cannabis, and Hazelnut Pâté with Apple, Bacon, and Sage, just to name a few.

“By presenting the material as such, we hope to make it clear the use of marijuana in various forms is a legitimate trend in cooking,” stated publicist Sam Caggiula.

Will you be picking up one of these ultra-trendy cannabis cookbooks?

Yes, this is not surprising, because I decided to cook something unusual for my friends, and it takes a lot of time to review a large number of sites that do not have a large number of recipes. So it would be nice to always have a book with lots of recipes using cannabis. For me, the source of the cherished ingredient is https://www.westcoastsupply.net/ but for proper cooking, a recipe book would be useful.

Thanks for sharing your thoughts

Hello! Recently I requested regular enhancements from online store. Prior to utilizing this items I didn't have extremely enormous assumptions. In any case, solely after a couple of long periods of purpose I began to see apparent outcomes. I prescribe you to get this wellbeing supplements from https://wayofleaf.com/ site. I'm extremely satisfied now about outcomes.