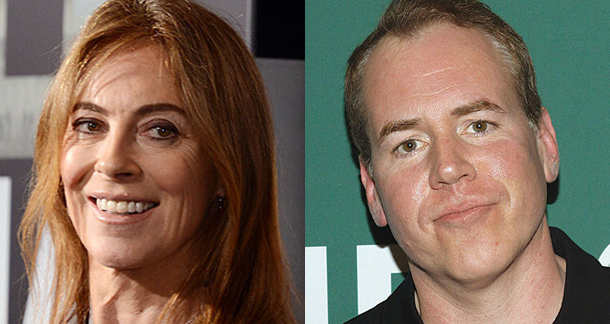 Bret Easton Ellis has courted controversy for years - if you’ve read American Psycho, you’ll know what I mean - but his recent actvity on Twitter has offended even him. He started tweeting about Hurt Locker director Kathryn Bigelow, and (in his mind) one thing led to another. Here’s one example quoted in his post entitled “Dear Kathryn Bigelow: Bret Easton Ellis is Really Sorry” on The Daily Beast:

Kathryn Bigelow would be considered a mildly interesting filmmaker if she was a man but since she's a very hot woman she's really overrated.

So, not a fan, then? But he went on to tweet more damage. I’d almost say he was ‘drunk-tweeting’ from some of them, which he does suggest in one his replies to a critic. We’ve all done it, right?

After speaking to a few women following the incident, including his mom, he decided he’d been way out of line - no, really way out of line. At least he’s man enough to admit his mistake, realizing he’d been treating Twitter "like a writer’s funhouse” and that his language “has become a problem”.

I don’t mean for the 364,000 people who follow BretEastonEllis’s verified Twitter account. No, it’s become a problem for the Twitter Me; my Twitter consciousness, just wanting to have fun and be a bit of a provocateur in 140 characters. And then realizing ... err, that’s not really fun or that provocative. It goes beyond douchiness into another more insensitive realm.

I can’t find any indication that Bigelow has even noticed all the furor. Ellis, after announcing he was taking a break promptly tweeted that Zero Dark Thirty was "the most morally dubious, obtuse and overrated movie of 2012."

I just want to know: is he doing it on purpose?

I think that's what everybody wonders. Is he really like this on purpose, or does he just have no grasp of how to act? It's so hard to tell. Like a guy with a really dry sense of humor and you can never figure out if he's joking or not.

Class Director
Rob from New York City is reading at a fast enough pace it would be cumbersome to update this December 19, 2012 - 8:15am

Content of Ellis' tweets aside, it amazes me how upset people get over what he writes. Our country is run by a broken and corrupt political system, and one guy says something on Twitter, and people start rending their clothing and proclaiming it the worst thing to happen ever.

I just noticed that the tone of the tweet in the example goes from sexist to something almost feminist by changing a prefix:

"Kathryn Bigelow would be considered a mildly interesting filmmaker if she was a man but since she's a very hot woman she's really overrated."

"Kathryn Bigelow would be considered a mildly interesting filmmaker if she was a man but since she's a very hot woman she's really UNDERrated."

leahzero from Chicago is reading everything Fitzgerald wrote. December 19, 2012 - 9:10am

Great. Now can he apologize for all the insipid novels he wrote, too?

It is kind of weird that people talk about his tweets so much. I don't get it.
Here I am talking about the talking-about.

I keep thinking he's either doing some really out there satire or trolling for fun. I mean, these tweets aside, he went on for a long time about how amazing "Magic Mike" was. I guess treating it like "a writer's funhouse" could fall into either of my two guesses.

That said, I really don't know why anyone takes him seriously (on twitter).

Barrett-- I think even how it is worded could be construed either way. Like he could be poking fun at the way women filmmakers are treated. I mean, he could be a huge misogynist asshole, too...

As far as im concerned BEE is godlike, he may make whatever comments he wishes and i will still love him with all my heart. /sarcasm?

BTW, the only reason Ellis apologized was because Bigelow could destroy his career in the film industry.

Dwayne from Cincinnati, Ohio (suburbs) is reading books that rotate to often to keep this updated December 19, 2012 - 6:28pm

It was a jerk way to put it, but if it was a serious comment on people over compensating because of guilt over sexism and the way anything beautiful people do is often considered better then something a ugly person does it might have some merit. Although it might be that Kathryn Bigelow wasn't the best example to use on those points since she has made some very serious and honest movies without being cheesy or just making propaganda for a political party.

@Rob - It's not always corrupt. Sometimes they aren't competent enough to figure out how to sell influence or votes.

Xyzzy from Sonoma County, Northern California is reading Kim Harrison’s “Ever After” December 20, 2012 - 3:49am

@Dwayne - If Ellis intended it to be serious commentary about how people favor attractive individuals, then I believe he would have compared Bigelow to an unattractive woman.  His claim that the work would be considered only "mildly interesting" if created by a man shifts the tone over to two claims I see a lot of sexist guys make online: that women only achieve great success when men feel either pity or lust for them, and that our society is bigoted against (thus severely undervalues the work of) men.

@leahzero - Insipid? Really? Ellis' novels (and tweets for that matter) may be many things to many people but surely not "lacking in qualities that interest, stimulate, or challenge." (Webster's definition).

Dwayne from Cincinnati, Ohio (suburbs) is reading books that rotate to often to keep this updated December 20, 2012 - 2:27pm

@XYZ - Just because it was a stupid way to put it doesn't mean he didn't have a point. It means he was rude, but we shouldn't throw the baby out with the bath water.