Boston Is Getting An Amazingly Cool Edgar Allan Poe Statue 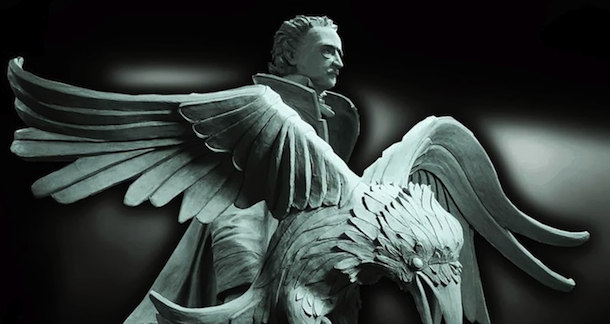 An amazing looking statue of Edgar Allan Poe is coming soon to Boston in celebration of the 165th anniversary of the author's death, according to MyModernMet. Although Poe is most closely associated with Baltimore, where he published many of his works and famously died in a delirium after being found in the streets, Poe was born and spent a considerable amount of his life in Boston. Because of this, the city of Boston has commissioned sculptor Stefanie Rocknak to create a life-size sculpture of the author, and now that the plans have been revealed, it looks like the work, entitled Poe Returning to Boston could be really impressive:

Everything, from the menacing raven screaming in front of Poe to the tell-tale heart spilling out behind him, exudes Poe's unique creepy dramatic flair. In her statement about her choices for the piece, Rocknak said:

His expression is complex. He is determined and his stride is decisive. His face reflects a mixture of pain, anger and sadness, and from some angles, a subtle sense of hope. As he walks towards Carver Street, he openly dismisses what is behind him with his left hand; the Frogpondians to the north. Boston is not claiming Poe, Poe is claiming Boston. To punctuate this, he leaves a literal paper trail behind him. He has not only left his mark on the world, he has left it on the city of his birth. His ideas are jumping off the page and cascading out of his trunk; a heart lies just behind him, and an oversized Raven explodes to the south. The Raven, which has become symbolic of Poe’s brooding creative spirit, visually reflects Poe; his coat mimics the raven’s wing, and, like a bird, Poe is slightly pigeon-toed. They are one, heading up-wind towards their final resting place.

The finalized statue, cast in bronze, will stand about five feet eight inches. It will be revealed on October 5th, 2014 at the corner of Boylston Street and Charles Street South, which will be dubbed Edgar Allan Poe Square.