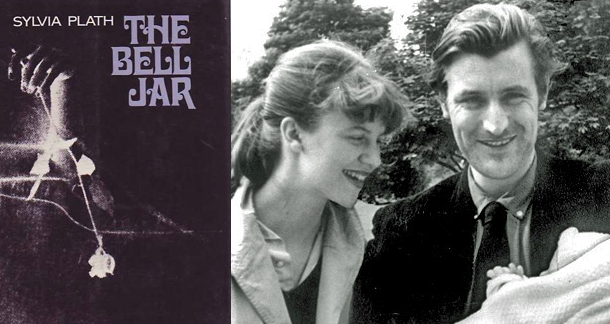 Elizabeth Sigmund, a close friend of Sylvia Plath, has accused the writer’s former husband, Ted Hughes, of ignoring Plath’s wishes that The Bell Jar should never be published under her own name, particularly while her mother Aurelia Plath was still alive.

Sigmund also alleges Hughes and his sister, Olwyn Hughes, deliberately left out the dedication to her and her husband David from the first edition printed with Plath’s name on it in 1966. The Bell Jar was originally published in 1963 under the pseudonym Victoria Lucas “because, according to Sigmund, the author did not want to upset Aurelia or other people who feature in the book. Aurelia died in 1994.”

Faber and Faber told the Guardian that it had nothing in its archive...

...which would support the view that Faber had any knowledge that Plath allegedly did not want the novel to be published under her own name in the event of her death. There's also nothing that would suggest that Elizabeth Sigmund was deliberately left off the dedication for our original hardback edition of the novel.

Sigmund did get an apology out of Faber (after writing to the Times Literary Supplement). She has also produced additional correspondence, but Olwyn Hughes claimed the dedication was a mistake — “Faber were probably trying to save paper.” Sorry?

There does seem to have been some odd occurrences with the novel after Plath’s death, probably on the side of Ted and Olwyn (who apparently hated Plath), and why Hughes would appoint someone who had little sympathy with his dead wife as Plath’s executor and literary agent is beyond me. I think Olwyn’s comment on the issue sums up her attitude: “What people want after they're dead. That just goes.” Families, eh?

Ted Hughes is such a shithead.

I just read a FANTASTIC book by Janet Malcolm called The Silent Woman. It's essentially a biography about the afterlife of Sylvia Plath, and it looks like the impact her life, death, and work had on the people who survived her. It's as much about the problems of biography as it is about Plath and Hughes, and I would highly recommend it. Apparently Aurelia Plath was VERY hurt by The Bell Jar and published Plath's letters to her in response to the novel's publication in the States. This led to the publication of Plath's journals by Hughes, and the rest is (fascinating) history.