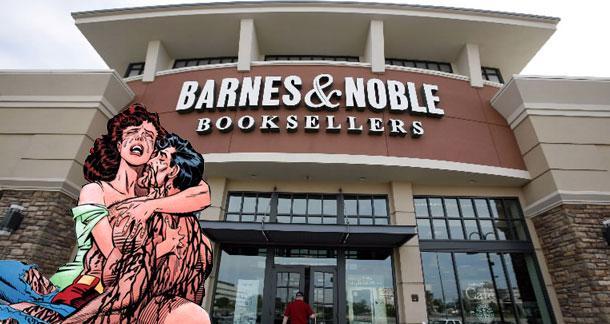 I'm going to begin this news item with full disclosure: I'm not a fan of eReaders. I understand the practicality if you are, say, a college student and need to schlep your weight in books around campus. Sure. When I went to college you had to drag that dead weight uphill, both ways, in the snow, and still be to class on time. Get off of my lawn!

Barnes and Noble, the last behemoth standing in the corporate bookstore fight for the privilege to house books and the folks who will sit for hours reading said books before leaving them in a pile, unpurchased, while they make off to the mall with a triple whip Java Chip from Starbucks, is a little miffed. As you probably know, they too have their own eReader--the "Nook"--and they're really pissed off that DC comics brokered a 4 month deal to release 100 of their graphic novels on Amazon's new Kindle Fire. Only. Instead of devising a marketing strategy around the nerds who actually want to buy the physical graphic novels and wouldn't be caught dead reading those novels on a goddamn eReader, Barnes and Noble instructed their stores to remove every copy of the 100 listed DC Kindle Fire graphic novels from their shelves entirely. And in true gigantic, entitled, grownass adult temper tantrum fashion they've disallowed purchase of these novels--we're talking titles like Watchmen, Sandman, Batman, etc. Money titles--where it directly involves their having to actually set hands and eyes to it. In other words, the only way B&N customers will be able to order any of these 100 titles from B&N is if they have it specially ordered and shipped directly to their home all hushlike. You know who else has a policy like that? I'll give you a hint: they dassn't sell books, dig.

I'm pretty sure that's a lot of hassle for people who probably feel more than a little screwed and will likely take their business to the other company who would provide the exact same service without the guff. So then again--Amazon wins! Logical business decisions are for the birds.

As an aside: anyone else have a cough at the name Kindle Fire? Paging Ray Bradbury, your future is here! And it's some hipster level irony.

(h/t to BleedingCool for the heads up.)

This isn't the reason why I don't do business with Barnes & Noble.  It's just another one in an already long list.

What a bunch of babies.

A pretty questionable move by B&N, to say the least.  Fans of the hard copy comics know where to get physical copies (ironically, I'm sure they can get a lot of them from Amazon, right along with a digital copy).

About eReaders - I've changed my tune.  Although I love a real book in my hands for a lot of reasons, I also like travelling with an entire bookshelf in my backpack.  Like everything, eReaders are fantastic in moderation.

This seems like a backwards movement...they're already struggling financially, bookstores being an endangered species, and now they're only going to hurt themselves further.

I love bookstores, and the last thing I want to see is for these stores to disappear forever.

Yeah, I'm fine with eReaders where it makes sense. Travelling, school, etc. But seriously, Amazon is going to hand their ass to them; now they'll get the physical sales and the eReader sales, too. Which is unfortunate. Amazon is decidedly more evil than B&N. Support your local indie bookstores!

Joshua Chaplinsky from New York is reading a lot more during the quarantine October 7, 2011 - 10:57am

Two for two on the snark there, buddy. Someone has it in for creative use of language.

Amazing, they're going to sacrifice their retail edge because they're losing the eReader race.  I'm sure this is the first step in a series of steps to ruin their business.  Good job B&N!

I think there's room for style, but not when it gets in the way of telling the story. Forced and annoying.

This is also an interesting move for DC. They got into the digital comic market really late, supposedly due to stubbornly standing behind the apparent value of printed books while Marvel was making money on their iPad issues and web subscriptions.

There has also been debate about large booksellers putting small comic shops out of business. The end of result of this new equation is a middle finger to both comic and book shops.

As an aside, I buy an even number of hard copy books and eBooks these days. I resisted the Kindle, but then found myself in possession of a free one after a freak Amazon contest victory. Overall, I agree with Greg about moderation between the two. However, my only justification for purchasing hard copy books w/o color images is simply their pleasing aesthetic on my bookshelf. So yeah, I have no real justification.

You know who I feel sorry for... the kids. Yup, the 5-10 kids in this country who now won't be able to go to their one and only bookstore (that'd be a B&N) in their town and get thoroughly freaked out by some Neil Gaiman/Sandman.

As an aside: That Bradbury shout out re: the Kindle Fire made my day. And then I cried.

Go ahead, faceless corporate drone-store! Devolve further and further toward your own extinction! I will continue to patronize locally owned comic shops and used book stores and get what I can't find there from the library and independent sellers on Amazon. As for e-books, meh. They don't smell right.

Joshua Chaplinsky from New York is reading a lot more during the quarantine October 10, 2011 - 1:13pm

Regardless of the publisher, we will not stock physical books in our stores if we are not offered the available digital format.

They're not going about their doom half-assed, eh? This is at threat level: straightens handwoven 'Welcome Amazon!' sign, takes fresh baked goods out of oven, lights candles, bends over.

It seems risky for a brick and mortar store to limit their hard copy audience in any fashion. Adult temper tantrum accurately describes this decision they have made. I feel like this would be the equivalent of Netflix saying that if they can't stream a movie on instant access then they won't offer the DVD either.