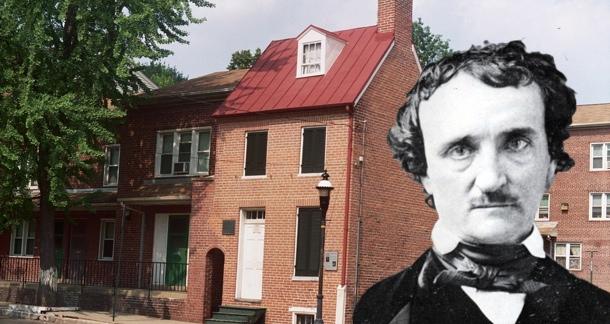 The Edgar Allan Poe House and Museum's latest woes started in 2011 when the city of Baltimore announced it would no longer be providing the attraction with the $85,000 in annual funding it had come to rely on. (Baltimore has also talked about selling or leasing about fifteen other historic landmarks including the War Memorial, the Civil War Museum, and the Phoenix Shot Tower.)

Since the budget cut, the historic row house has been surviving off of charitable donations and money it had socked away from events such as the annual Poe birthday celebration and Halloween party. But according to a new three-piece feature in The Baltimore Post-Examiner, the coffers are running dangerously low and the house museum's future is uncertain.

It's not the first time the Amity Street home has been in trouble; the small brick duplex was set to be demolished to make room for public housing in the 1930s, but it was saved by public outcry. Today, the E.A. Poe Society and Baltimore's Commission for Historic and Architectural Preservation (CHAP) are working with consultants to find a way to make the literary destination self-sufficient, but the question is whether they can do it before the cash runs out.

Part of the difficulty in making it work is that the house museum—which doesn't keep attendance figures but estimates a mere 5,000 visitors a year—is off the beaten tourist path and charges a shockingly low admission price of just four dollars.

If the house does close to the public, it will be survived by some of Poe's other former homes, including the Poe Cottage in the Bronx and the Poe National Historic Site in Philadelphia. How important do you think it is to maintain public access to historic literary locations such as Baltimore's Poe House and Museum?

There's also one in Richmond VA. Maybe they could all form a non-profit corporation or collective and share exhibits, costs and revenues.

I've been there twice. It would be a shame for it to be demolished. Unfortunately, it is hard to find (not very well-marked) and tourists aren't likely to wander into the neighborhood in which it resides. I don't recall them selling any souvenirs or merch (maybe the offerings were uninteresting to me), but they could do that to help alleviate some of their financial woes. I think their biggest battle is just being out of sight, out of mind in the public eye.

Baltimore...ugh. I have such a love hate relationship with that city. I think it's important to keep museums and historical sites open. I get that the City can't fund everything, but this is pretty sad.

They should raise admission price a little. Even if it is to $10 and, like Scott said, sell merchandise. Shirts with clever sayings or quotes on them. Something that isn't expensive to make and can be sold for a nice profit. Also, they should get their name into the hotels and see if they can work out a deal with transportation to get people there. Start cheesy ghost tours that take place at night or something. It is unfortunate that this is happening. I've never been to Baltimore, so I'm unfamiliar with the area. Though, I'd love to visit this place. Or even live in it. What a charming little row house.