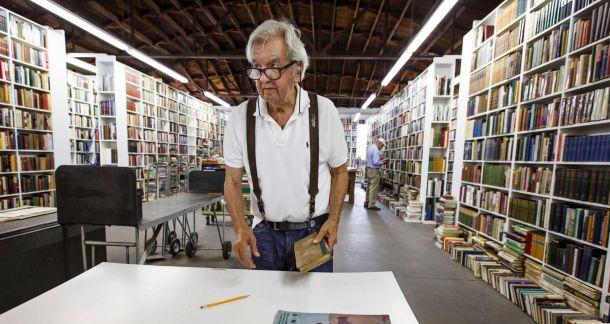 Archer City, Texas has been an unlikely haven for used and rare books ever since author Larry McMurtry opened the sprawling four building Booked Up store back in 1988. Recently, however, McMurtry, now in his mid-seventies, decided to downsize his operation and auction off 300,000 used books. At the end of this sale, about two thirds of the Booked Up inventory will have been sold.

McMurtry, author of The Last Picture Show, Lonesome Dove, and many others, has long resided in Archer City, a small town Northwest of Dallas. As he grows older, he has whittled down his operation out of consideration for his heirs, who he hopes will take up the store in his stead, saying “One store is manageable. Four stores would be a burden.”

The auction is playfully titled “The Last Book Sale”, but considering the climate of uncertainty surrounding the world of book sales and publishing, the name may have taken on grim connotations for some, especially considering that many of the attending buyers are aspiring book-sellers themselves.

McMurtry says he felt optimistic for younger sellers, however, dismissing the rise of eBooks as irrelevant to his niche marketplace.

I think a good bookstore will not suffer. All the controversies about the Kindle don’t have much impact on the rare book business.

See a write-up of the event over at AddisonsAuction.com.

man, wish i could be there.