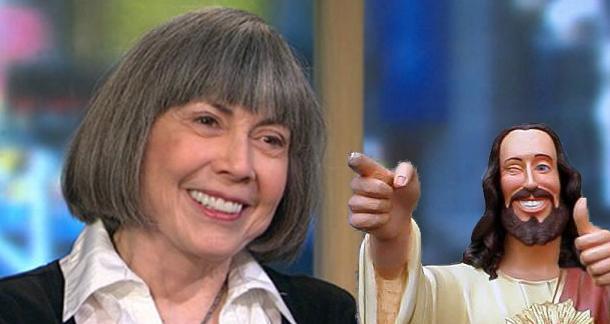 Anne Rice took to her Facebook page yesterday to announce that her novel, Christ the Lord; Out of Egypt, is headed for the silver screen.

The book chronicles a seven-year-old Jesus Christ as he travels from Egypt to Nazareth. Chris Columbus’ 1492 Pictures and CJ Entertainment acquired the rights, with Cyrus Nowrasteh writing the screenplay and Betsy Nowrasteh directing.

Rice has had a tumultuous relationship with organized religion, but she remains a fan of Jesus. But that's not why this project is interesting.

It's interesting because of Nowrasteh, who wrote the TV movie The Path to 9/11.

The miniseries chronicled the road that led to the terrorist attacks on Sept. 11, starting with the 1993 bombing of the World Trade Center. It's been the subject of a great deal of controversy--Clinton administration officials argued that parts of the mini-series were fictionalized, and ABC later re-aired it with edits and word substitutions, as well as a disclaimer pointing out that the film was not a documentary. The miniseries was never released on DVD.

Luckily, religion is not nearly as controversial a topic. Right?

Examiner has an interview with Rice about the project. Here's a peek:

So much has been written about Jesus and so many movies have been made. But I hope this will be something entirely different. In a way it is the story of Christmas in a new and original manner. I wanted so to capture the struggle of the little boy Jesus as, having put aside his Godly knowledge, he finds out about suffering and death, about fear and struggle, and about His unique relationship to His Father.

I would say we should fan-cast this but it's Jesus as a kid, and that's not as fun (because it robs me of the opportunity to suggest Samuel L. Jackson for the lead role).

Fuck.  Lamb should be the Jesus movie being made.  That's the Jesus that I like.  Kung-fu action Jesus.