And The Winner Of The 2012 Pulitzer For Fiction Is... Nobody? 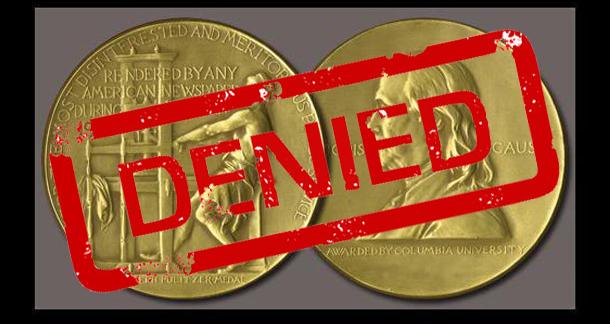 The 2012 Pulitzers for books were just announced. The three finalists in the fiction category were:

And the winner? Nobody!

Since it was founded in 1918, the Pulitzer for fiction has been withheld nine other times, most recently in 1977.

The Twittersphere is explodifying over the news. It seems as though the panel of judges couldn't muster a majority vote on any one of finalists, though because I'm getting that information from Twitter, I allow it could be wrong.

Here were the other book prizes awarded by the committee:

​What do you think, folks? Does this rob the fiction publishing industry of credibility, as some have proffered? Or is it much ado about nothing?

What the fuck?  I wasn't even nominated.  This will not stand.

I would have loved to see Denis Johnson's face when he got the news. I attended his reading at the U of M few days ago and he's incredibly arrogant, but in a really funny way, especially when clowning coeds brave enough to ask him questions. He spent some time discussing how his only goal is to win huge awards and cannot believe it when he loses, then decides perhaps his book wasn't all that amazing. Nonetheless, I got the impression he really, really, really wanted this win.

The Arabic writing award was also withheld this year I believe. The simple matter is it is either worthy or it isn't. Just because you wrote a book that got to that level doesn't mean it is actually up to snuff. I would want to win because it is on level with the other winners, not because we were the only submissions worth getting to that level.

Howie, I have no clue how you were overlooked....again!

Just give it to Wallace & everyone can shut up, it's not like he'll win it again.