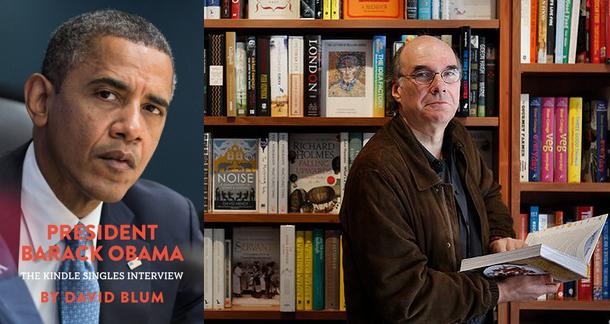 President Obama is no stranger to controversy--it's the nature of his job. Everything he says is certain to raise ire with a particular group or organization, and his recent comments on the state of journalism in America are no exception.

Speaking to David Blum for Amazon's Kindle Singles Interview series, Obama had this to say (reprinted from GalleyCat):

It used to be there were local newspapers everywhere. If you wanted to be a journalist, you could really make a good living working for your hometown paper. Now you have a few newspapers that make a profit because they are national brands, and journalists are having to scramble to piece together a living, in some cases as freelancers and without the same benefits that they had in a regular job for a paper. What’s true in journalism is true in manufacturing and is true in retail. What we have to recognize is that those old times aren’t coming back.

There does seem to be some resignation in his words—a waving of the white flag rather than a rallying cry to save the local newspaper. However, I don't think Obama's being opinionated here, but merely stating the facts: it is hard to get work as a writer these days.

Much of the controversy surrounding the President's remarks arises not from his words, but rather the fact he's talking to Amazon in the first place. Independent booksellers see this interview and Obama's recent speech at an Amazon fulfillment center as a slap in the face, since the online retailer is almost unanimously hated among local bookstore owners. Oren Teicher, CEO of the American Booksellers Association, released a statement criticizing Obama's actions. In it, he said:

While Amazon may make news by touting the creation of some 7,000 new warehouse jobs (many of which are seasonal), what is woefully underreported is the number of jobs its practices have cost the economy … For you to highlight Amazon as a job creator strikes us as greatly misguided. As you’ve noted so often, small businesses are the engines of the economy. When a small business fails and closes its doors, this has a ripple effect at both a local and a national level. Jobs are lost, workers lose healthcare and seek unemployment insurance, and purchasing decreases.

This is certainly a sticky situation, with no real easy answers. Amazon does pose a threat to indie booksellers, but customers clearly like their cheap prices and convenience, and we may have to accept that the company isn't going away any time soon.

There are probably some indie stores which give benefits to employees, but most bookshop jobs are low-level retail positions with paltry wages, no benefits, and little chance for advancement.

But I've heard some stuff about working conditions in amazon facilities which give me pause. I hope they truly strive for constant improvement rather than pure service to the bottom-line.

I think amazon will be good (not best, not ideal, but good) for indie publishing, bad for indie stores. Which do you care more about? I can remember looking into special orders for small-press books from a local shop and the markup was ridiculous. So I either bought used books or big sixers (mostly the former). Amazon allows for me to purchase from just about anybody publishing just about anything, including self-pubbers

When I'm buying a product—an object—convenience, selection, and price are what I look for, so the capitalist in me has very little remorse about shopping Amazon for such things (in addition to them offering that self-pub platform JY mentioned, of which I'm quite fond). Service-oriented transactions, though, that's where I seek out small/independent businesses: restaurants, hotels, recreation, etc.

When buying books, there's really no service element I'm looking for; I'm an informed consumer in that regard, so just sell me the thing (other types of reader-consumers would certainly disagree—good for them—but I personally don't get my recs from booksellers). If there's something the indie store can uniquely offer, like events, author readings, value-added merch, books clubs, etc., great, that often draws me in. And of course used shops have an often-necessary human element that I do enjoy, but buying used books doesn't benefit their authors, unless that used copy is a gateway to more of their books I might buy new later.

When I go to a bookstore, it's for the environment, not for the books. I have loads of books, when you know a lot of writers, getting "recommendations" is really not an issue. So I feel like Gordon. If a store offers me a great environment, I will go out of my way to support them, I will go to that store, I'll buy the stuff they have. But if I have something specific I want something to read, I'm going to get it in the cheapest and easiest way I can.

As an aside, I worked for a bookstore for awhile in my early twenties and I loved that job-- the people I worked with, the people that came in to buy books because they loved books, it was all great. But the pay was horrific. They paid above the state minimum, but that wasn't enough for me to live on. I had to have roommates, I couldn't afford a car, I ate a lot of crap that was on sale. That's just the nature of retail, and I worked for a chain, I at least qualified for benefits. I doubt that many indie bookshops can provide full time hours and full benefits for their employees (and they hired and fired a lot of people seasonally, too) so I am unsure how Amazon is a worse job creator than brick and mortar shops.

I can't really champion independent bookstores because we don't have any in my town. Well, we have used bookstores but that isn't the same thing. I will buy books from there, if I am in need of something for my classroom. However, most of my business goes to Amazon. So, the only company that is being harmed by my purchases through Amazon (in Las Vegas) is Barnes and Noble. And when it comes to B&N, the store isn't much better than Amazon. It was brought to my attention that B&N has changed their purchasing practice, which has caused many authors to lose shelf space. The importance of these brick and mortar stores is to have the ability to browse and discover new books, upcoming authors, rare gems. Take away the customers' ability to do that, and you've failed them.

My only experience with an independent bookstore was when I lived in Florida back in 2004. There was this little place across the street from my apartment, and I went in there to see what they had to offer. As a poor college student I didn't have a lot of money, but I had a major book habit. The books were all full list price, especially new releases. I never went back because I couldn't afford it.

People don't want to (or perhaps, can't afford to?) buy from bookstores as much anymore, otherwise they would. The ABA can be sour-faced about it all they want, but it just comes off as an organization that wants to try and ride their own personal Titanic all the way down, claiming that it's unsinkable all the while.

Give people what they want at a good price and they'll buy from you if they can. Businesses have to adapt with the times. Those that don't will die. I suspect that the bookstores that do survive will have tapped into niches that Amazon can't compete with. But whining about losing the competition game just comes off (to me) as out of touch with our evolving reality.

I like our local bookstores a lot, but I like my Kindle more (I can't help it!!). Maybe the ABA members should be thinking up new ways to get my business instead of complaining that I'm not reading books the way they want me to read them.