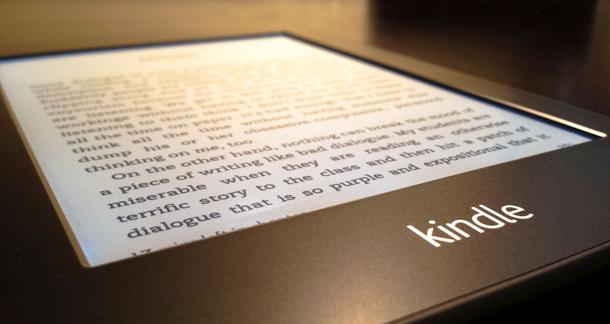 If this story is true, it demonstrates just how out-of-touch some big corporations can be. The Digital Reader reports that representatives from Amazon have been soliciting indie booksellers in the hopes of convincing the shop owners to sell Kindles in their stores. This news inspires such a guttural "Really?" that Digital Reader's Nate Hoffelder put a special editor's note at the top of his article: "No, this is not a delayed April Fool's Day Joke." I mean, indie booksellers largely hate Amazon. So...really?

It all started last week when Skylight Books in Los Angeles received a call from an Amazon sales rep. The owners made a blog post about the encounter. Here's an excerpt:

[The representative] was given the task of reaching out to independent bookstores in order to ‘build’ a ‘relationship’ with the indies in order to ‘partner’ with us in a program to sell Kindles in our store…yea, really. so, in my most incredulous voice i asked him if he was serious and stated flatly that we wouldn’t be interested.

When the Amazon rep asked why he objected to such a partnership, the shop owner gave him a response that he and his sales rep brethren should probably get used to hearing:

-the Kindle has to be open source.

-Amazon has to stop its predatory business practices such as undercutting the prices of an entire market of products (books) that they themselves do not depend on for revenue and/or creating sleazy apps that encourage people to buy from Amazon while they’re actually standing in a bookstore.

-Amazon needs to start paying sales tax in all 50 states of the union and stop sucking all the money out of every community they infiltrate.

Skylight isn't the only bookstore to receive solicitation from the online retailer. According to Shelf Awareness, Island Books in Mercer Island, WA was also contacted about carrying Kindles in their store. Paul Constant of Slog reports that Amazon has contacted other booksellers around the country, but he doesn't give any specifics.

Also, Amazon has opened ten positions for "Field Sales Representative - Kindle," which requires "Participating in assisted selling activities on weekends at select retail locations." Hoffelder of Digital Reader surmises this would entail "pitching the Kindle at book fairs, author signings, and other more personal events. You know, the kind of events that a bookstore might run."

Amazon has yet to comment on this news, but there is strong evidence supporting the bookseller's claim. Do you think Amazon would ever meet indies halfway and form a truly beneficial partnership for both parties? Or is it just another scheme to sap the market further?

Charles from Portland is reading Mongrels by Stephen Graham Jones June 6, 2013 - 10:26am

Powell's sells Kobo, and are part of the indiebound e-reading app. Most of the indie bookstores I've been to around here are also a part of indiebounds e-reader service. If you must use an e-reader, I would find one that supports that.

Dwayne from Cincinnati, Ohio (suburbs) is reading books that rotate to often to keep this updated June 6, 2013 - 10:37am

I've never bought into the romance of the bookstore, indy or corporate. I don't hate them, or think they are horrible people, but they run a businesses that as a group never really seemed that concerned with anything I with anything I care about. Some, like Half Price Books, have been an exception to this, but they sell ereaders.

I much prefer my Kindle to paper books, and the best bet for getting part of that money would be to sell them. If they feel that they'll make more money not doing that or just plan being silly I'm fine with that, but I don't have any sympathy for people who turn down my business on these grounds.

Dwayne, it's not about buying into it, at least for me, it's about supporting businesses and people within my community. Could I get everything I ever wanted from Amazon? You bet. But how is that encouraging new job creation, or sustaining the jobs that already exist within my community.

Or maybe we should all just live in the remnants of a thriving economy with things like real jobs, and buy things from Amazon?

Dwayne from Cincinnati, Ohio (suburbs) is reading books that rotate to often to keep this updated June 6, 2013 - 3:33pm

You questions make so many inaccurate assumptions it can't be answered. I'm unsure how to address them all, but I'll just hit the ones that really jump out to me.

But how is that encouraging new job creation, or sustaining the jobs that already exist within my community.

First and foremost the idea that a bookstore is automatically 'more' in your community then a local book store. I understand this will vary by town, and that I live in a place with several thousand Amazon jobs, but the guy delivering the book for the post office or UPS needs a job and other wise provide the necessary infrastructure, like anyone else.

Second, and I know this is a big one, I don't owe anybody anything extra because they happen to live closer to me. Lots of small businesses don't keep they money local, or don't use it in a way that benefits the area they are in, which fine they don't owe people anything but the product the promise so I don't them anything back. Robert Langley and Jeff Bezos are both business men, they sell books so I don't think they are villains, but I don't think going out of my way to help Langley rich because he is here in town is going to be a lot better for my community. Unless you buy into a pretty extreme version of the idea the rich are job providers and you don't want to scare them off.

Third, the idea that people buying local will always be a good thing is a bit much. Yes, with some products, like produce or costly to transport items, you should get a better price to quality ratio from things in your area. But I'm not aware of any real evidence that shopping as a protectionist is going to help improve the local economy. Most of the time it seems that there are dozens of factors - quality of work force, crime, taxes, cost of doing business, difficulty of starting or bring in new business - that determine such things.