Amazon Announces its Best Books of 2013 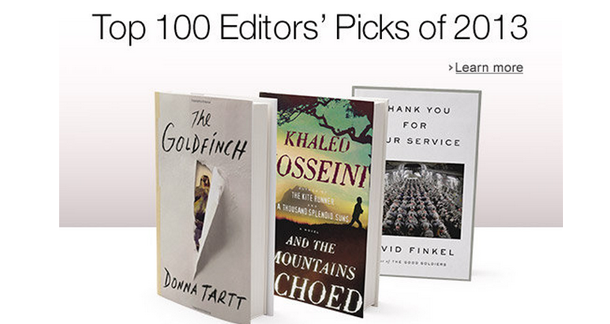 The closer we get to the end of the year, the more ‘best of the year’ lists appear. Everyone seems to have one and Amazon’s no exception, as they’ve just published their list of the Best Books of 2013. Well, so far. It also includes some interesting choices, as you can see from their top ten:

A few of the choices have made it from their mid-year list. While I’m not a fan of Donna Tartt, it’s good to see Kate Atkinson on there (you may remember her excellent book Started Early, Took My Dog, which you should read, if you haven’t already).

The list also includes a selection of the best Digital Singles, which is a new thing. Oh, and Stephen King’s Doctor Sleep tops up the Science Fiction and Fantasy list, closely followed by The Ocean at the End of the Lane, by Neil Gaiman.

The cynic in me says that it’s just Amazon capitalizing on the Christmas season (particularly when you see the “Our Favorite Gifts For…” section. But, it’s only the beginning and I’m sure there will be more of these before 2014 comes in. Do you agree with the choices? Something missing that should be there?

Low Down Death Right Easy and Zombie Sharks with Metal Teeth are missing. Also, nothing by Khaled Hosseini deserves a top nomination for anything. Xmas shopping gimmick, for sure.

Kelby, I've had LDDRE on my wishlist for awhile now. How good is it?

EDIT: "How good is it?" is kind of a dumb question, but I think I'll leave it as-is because I'm too tired to come up with anything more eloquent.

Ha, well in an equally-simple response: It's not good, it's brilliant.

Calling it a Southern trash/drug story doesn't do it justice. It IS that, but so much more, it's romantic in an ugly, ugly ass way, if that makes any kind of sense at all.