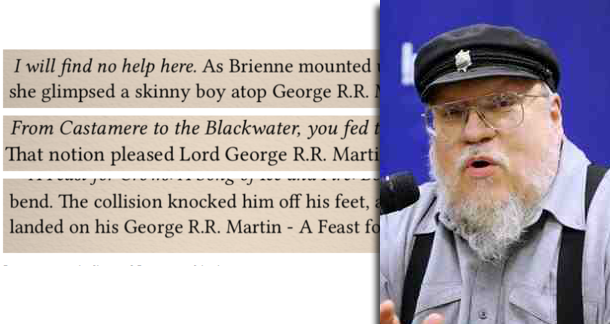 Those of us involved with the printed or digital word have all suffered from errors. They just creep in, no matter how rigorous the checks. Hell, I’ve even seen professionally edited texts littered with misspellings and literals. But I don’t think I’ve ever seen anything this bad. Or this hilarious.

Formatting errors in an eBook version of A Feast for Crows by George R.R. Martin have resulted in the author’s name being sprinkled throughout the text, often appearing in bizarre places, casting “Martin as any number of items and people”. Here’s a couple of my favorites:

I will find no help here. As Brienne mounted up again, she glimpsed a skinny boy atop George R.R. Martin

From Castamere to the Blackwater, you fed them well. That notion pleased Lord George R.R. Martin

Thanks to gameoflulz, a Tumblr poster, we have the evidence in screen shots like this: And, like him, I can’t stop laughing after reading them. There’s currently no word on how Lord Martin is taking these alterations. We hope that it does indeed please him, at least momentarily.

I've never read, or seen, A Game of Thrones, because nobody has ever managed to make me give a shit yet. And now... I'm finally intrigued!

This is the best thing that's happened in publishing since Gutenberg.

Ugghh I can completely empathize with this. It took three attempts to get both the printed and Kindle versions of my book correct. After much head pounding, we discovered the version of MS Word I was using and the version my editor was using in Berlin, was not converting the document to a .PDF correctly and defauting to a previously saved version before about 30, albeit very minor, corrections had been made.

The only good that came out of it was that those who knew about it bought out all the error laden books I had on hand and squirreled them away just incase.

Oh well, such is technology.

The Children of the Sun - Book One

Joshua Chaplinsky from New York is reading a lot more during the quarantine August 30, 2013 - 8:52am

I just read Crows on my Kindle. No hilarious errors for me.

"That hair was a George R.R. Martin" oh that's so absurd it's brilliant. I'm not into the books or the show, but this gave me a good chuckle.