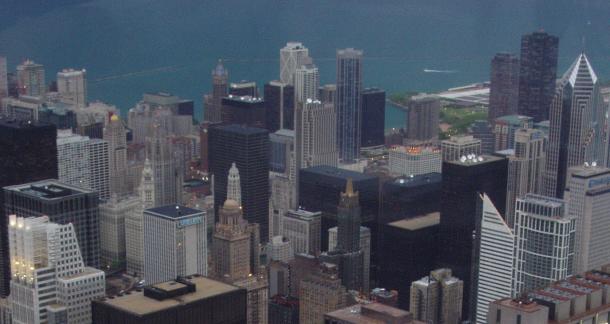 Chicago, the city of big shoulders, is going to need every ounce of that muscle to haul unsolicited donations of religious books to the dump.

Over the last week, many, many Chicagoans have received copies of The Great Controversy in the mail. How many? 600,000.

The book, a religious tract by Seventh-Day Adventist E.G. White, has been distributed in mass quantities before. New York, Philadelphia, San Francisco, Washington D.C. and Charlotte all had their turn.

Apparently, a group of donors pulls together, decides which zip code is most in need of religious reading material, and sends out the books in a mass mailing. The cost of shipping these books gets down to about $1 dollar per book, which is cheap, but we're still talking about $600,000, an amount that others feel could be better spent elsewhere.

Making a 600,000 print job is not the best use of resources and energy...Why not email it?

Dwight Hall, who works for the publisher behind the mailing, says he's aware that most of the books get treated like junk mail, but hopes they are still sending a positive message:

People care enough to work hard to give up their money knowing not everyone is going to read it, but at least [recipients will] have an opportunity to say, 'That's pretty awesome that somebody cared enough to send a book and they don't even know who I am.

Something I say constantly about the lousy pizza joints that send coupons every other day. "Wow, I never knew you cared!"

Of course, Chicago being Chicago, people have not been shy when it comes to sharing their feelings about the book: 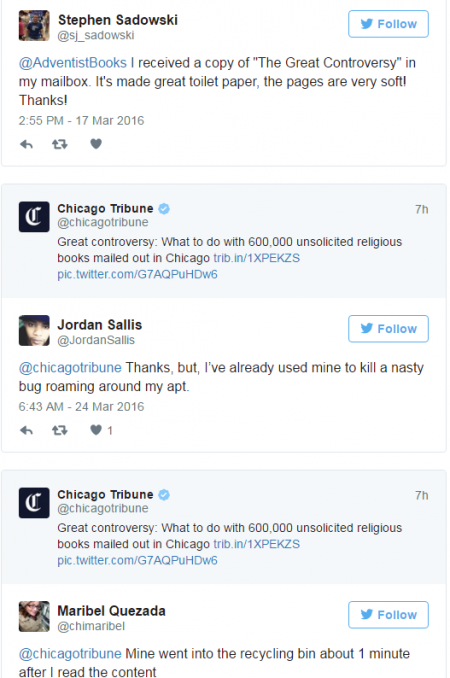 Joshua Chaplinsky from New York is reading a lot more during the quarantine March 24, 2016 - 1:46pm

Yup. Got these in NY a few years ago. One came to every floor in the building I worked in.

At an average of $9.5 per day for an adult male to eat reasonably healthy (http://www.personalfinancewhiz.com/the-average-cost-of-food-per-month-fo...), that $600,000 could've fed over 63,000 people, could've paid for tuition at a state college for 63 people (http://www.collegedata.com/cs/content/content_payarticle_tmpl.jhtml?arti...), and bought 1,170 laptops for underprivileged students (http://www.laptopmag.com/articles/the-average-pc-laptop-cost-513-in-febr...).

Joshua Chaplinsky from New York is reading a lot more during the quarantine March 25, 2016 - 9:33am

But Dino... none of those people would have made it into heaven.

Dammit, I forgot about the heaven angle!