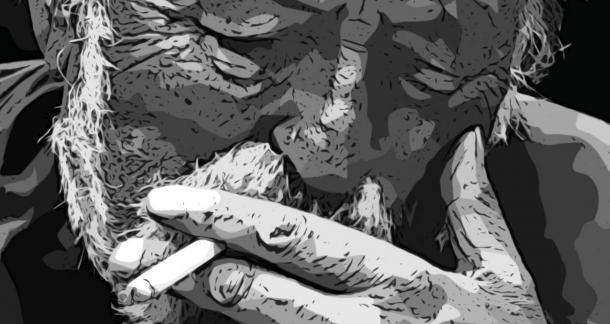 Jim Harrison is not the household name he should be. He's mastered the novella, been compared endlessly to Hemingway for his barrel-chested, full-throttle lifestyle, and is somewhat of a cult figure in England and France.

The author passed away this weekend from heart failure.

Here at LitReactor, we'd like to honor the poet through 5 remembrances.

1. Harrison was most famous for 'Legends of the Fall.'

...but it's The Woman Lit By Fireflies you really need to check out.

2. Harrison was a foodie.

To say the least. He wrote an entire, awesome book about food (see below). Harrison once ate 144 oysters in a sitting. He had a personal wine festival with just himself and 38 varieties of Côtes du Rhône. He once shared a meal with famous eater Orson Welles, which included, "a half-pound of beluga with a bottle of Stolichnaya, a salmon in sorrel sauce, sweetbreads en croûte, a miniature leg of lamb (the whole thing) with five wines, desserts, cheeses, ports."

3. Harrison has lived some tragedies.

A neighborhood quarrel with a girl ended when the girl shoved a broken bottle in Harrison's eye. This is when Harrison's love of being alone in the woods began, a love that would carry through the rest of his life.

a milky sparrow in its socket.

When he was 25, Harrison decided not to go on a hunting trip with his father and sister. The pair left without him, and they were killed on the road by a drunk driver. Harrison blamed himself for their deaths, thinking that if he hadn't made his decision the moment he did, his sister and father wouldn't have encountered the drunk.

4. Harrison was an outsider. In many ways.

Outside wrote a great profile of Harrison, which chronicled Harrison's battle against a den of rattlesnakes near his Montana home that eventually resulted in two barrels filled with dead rattlers. He knew the bushes, the trees, and the animals where he lived.

Somebody’s got to stay outside.

5. He was a writer to the bitter end.

On Saturday night, my oldest friend, Jim Harrison, sat at his desk writing. He wrote in longhand. The words trailed off into scribbles and he fell from his chair dead.