(the blur in this phone photo makes me look really stupid) I've been writing a lot in my special lady friend's Florida room. It's a great away from home office, I can drink and smoke and write in solitude all night when everyone's done partying.

Mine is pretty embarrassing...This is the best spot to hijack my neighbor's wifi. I do most of my writing at Starbucks though ( but If anyone ask, I'm doing homework)

mine is a used computer, a 12 year old monitor, and a desk under a world famous frank kozik poster.

Chester Pane from Portland, Oregon is reading The Brief and Wondrous Life of Oscar Wao by Junot Diaz October 15, 2011 - 9:32pm

@Brandon: Is that my Warmed and Bound sitting up there?

Yep. Taking care of it soon.

Would have happened today but the Hen House I went to didn't have bubble-lined envelopes.

WHY DO MY PICTURES ALWAYS BREAK! AHHH TECHNOLOGY!!!

There's a very disturbing similarity between mine and Brandon's writer's space.

I wish I had a designated writing spot.  All I have is a laptop, that goes on my lap, while I go sit on the floor with my back against the wall.

Yeah, I used to have a writer's desk but since I got my laptop, I write wherever I feel like,  usually on the floor of my living room.

I attached the picture. I do not know if it will show up but I will try it. If not, you will have to imagine what a desk by a window with a view of the ocean looks like. Anyway, all I can do is submit it. It is up to others to publish what I submit!

Hey Phil I have never seen a keyboard like that. What are the colored keys about?

They are meant to help as "shortcut keys" during the recording process. You can't see it in the picture, but the computer is a Mac Pro with a hefty amount of RAM, which we use for producing music. I figured, "Well, I'm making a big investment, so why not throw in a pretty keyboard with a bunch of colors?"

It does help, but half the shortcuts I don't use.

Charles from Portland is reading Mongrels by Stephen Graham Jones October 17, 2011 - 9:22am

if anyone is interested i have a "flexible" silicon rubber keyboard im not using. i could sell it.

I have a couple silicone keyboards I use when I forced to write on my netbook, they're pretty cool if you have nothing else.

Here it is. It's like having an office in a tree house.

I must be one of the only people with a desk that isn't propped up against a wall.  I find myself feeling clausterphobic when working in a cramped atmosphere.  Sure, this behind the couch setting is full of distractions, but I feel better having to work while tuning things out, specifically because I use this desk for writing and crafting.  (I also design crochet patterns and alter clothes here.) That owl is the coolest crochet I've ever seen!

Thanks, Raelyn!  I'm planning on opening an Etsy shop at some point so I can sell patterns for extra cash to support my lazy writing gig but it's taking some time.

My writing space is..."in progress" as we get the house organized and ready for remodel. Later, when I spread my notes out I will take a picture of my current (comical) "writing space" on the couch/coffee table/rubbermaid tub in the living room.

Awww Man, I am so jealous right now. I like to go in the Apple Store and drool over the desktops with their monsterous monitors. I like the "Go big or go home" attitude with the purchase also. Hells Yeah, gotta have the multicolored keyboard.

David Buglass from Saskatoon SK is reading The Psychopath Test: A Journey Through the Madness Industry November 28, 2011 - 11:13am

My writing space is a work in progress. I've been hopping between this broken down old couch where I sleep as well and a local coffee shop.

I generally write in a blue recliner in front of my television, which is sometimes on. It is where I sit in my author's picture.

My main writing space, the buckle down and go area, required 15 minutes of cleaning before I could take a picture.

The Lizard King stares at me while I work, to remind me that artists are like sharks. They move forward (progressing their skills and message, keeping water moving over their gills) or they OD on heroin.

Love the poster. I made sure my first tattoo was a Jim Morrison tattoo.

^ I noticed our writer spaces look alike. You have a better view though. And maybe a better preference for liquor.

Thanks to Toronto's strict rent controls, I have a view of the rich people neighbourhood.

fport from Canada is reading The World Until Yesterday - Jared Diamond November 4, 2012 - 9:24am

Well, my setup is sitting inside my life which is in files and boxes and unresolved things. The monitors, my interface to the computer/internet/world is a PLP, 20"x30"x20" which I saw in a blog article and made soooo much sense.

fport from Canada is reading The World Until Yesterday - Jared Diamond November 4, 2012 - 10:47am

That my friend is a Dell 3101 bought on sale with income tax return monies from the government which I entrust with extra dollars so that I can have a technology bonus at the end of each year. It is 2560x1600 and the two side monitors are old normal shaped things that rotate to 1200x1600. I am loving this space and the relationship I have to the internet and my apps because of it. I write on an iPod touch with a bluetooth keyboard, whenever and wherever I have time. Often school/cafe/diner/car.

I've noticed that a lot of you are *terrible* photographers. I suppose this is why we write here, instead...lol

Thought I'd already posted in here; must've been another forum …  Anyway, here's me. Pic's from a couple years ago. I've since replaced that dinky lapple with a 17" Macbook Pro. That's the same studio where I do my home music recording, so the writing desk off to the side helps reduce distractions. More here. 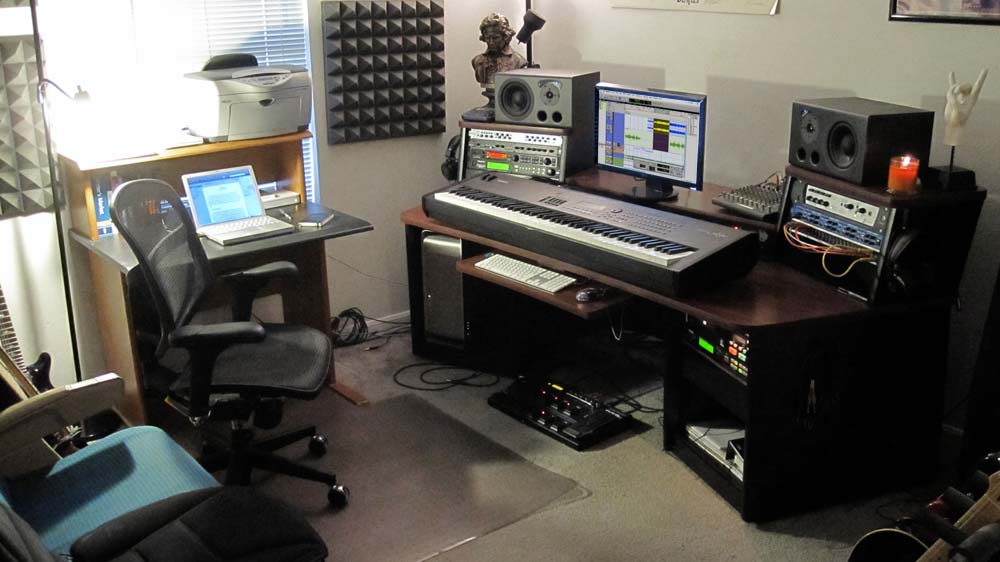 JEFFREY GRANT BARR from Central OR is reading Nothing but fucking Shakespeare, for the rest of my life November 11, 2012 - 8:35pm

Gordon that is an amazing space and a great collection of guitars. That HM Strat is gorgeous!

Thanks. Yeah, that HM Strat's a relic of the ole hair-metal days… haha  Who ever knew it would be worth anything, but they're kinda rare now, the first USA models like that one (my '66 Strat is the most valuable). That whole console is on casters, so I can wheel it out and get behind there easily. Which, thanks to the patch bay, isn't very often. Took me a while to map everything but, but getting organized has been a lifesaver, because now when I sit down to record something, I don't have to scratch my head so much over the configuration anymore. 75% of the time it's just the synth or the guitar straight into Pro Tools anyway, but the monitoring can get tricky sometimes, especially when vocals are involved and/or multiple people. Living in an apartment sucks.

Dwayne from Cincinnati, Ohio (suburbs) is reading books that rotate to often to keep this updated November 12, 2012 - 8:22am

The writing area in my home, and me standing next the a statue of a gaint praying mantis someone left in the weeds behind my place.

OtisTheBulldog from Somerville, MA is reading The Brief Wondrous Life of Oscar Wao by Junot Diaz November 12, 2012 - 8:55am

Gordon - I love the space (really nice website too). I'll try to take some pictures of my writing space this week, once I get it a little more cleaned up. I'm a bassist, but I have some other instruments hanging around too. I play a shitty guitar. But i have a 64 Harmony Rocket that's pretty sweet. I also have a drumkit where the bass drum is an old plastic suitcase. One of my goals is to clean this joint this week so this will inspire me to get it done.

Dwayne - what are the different colored folders? Who's the pooch?

Dwayne from Cincinnati, Ohio (suburbs) is reading books that rotate to often to keep this updated November 12, 2012 - 9:25am

The folders are the various projects I'm working on that haven't made it to editing. I only get anything done by longhand.

The dog is Duchess. I think that is just her favorite spot since she has slept there since before it was my writing room, even when it was pretty much empty.

It only took me forever and a day to figure out how to attach a file. NBD...*sigh*

Oh snap what soup you got there?

I got one of them half-cork-half-whiteboards going with the novel so far. Working out okay.

@Renfield, I got some kind of barley veggie canned soup. Its an old pic, though. I just finished a can of Spaghetti-o's--I'm a healthy eater, I know.

As for the board, its supposed to remind me to do stuff like register for spring classes, or do the laundry...usually I forget anyway, even when it's right in front of my face. But it looks legit!

I finally have a dedicated room for writing--not just a corner.

My writing room with all the reminders that I should be writing.