Has anyone seen the film 'Antichrist'.

This is one of the best films I've seen in a while. Everything about it was superb and the depths of the message left me shaken inside my head.

I don't have any friends I could really dissect the film with so I wanted to see what people from LitReactor thought of it.

The movie is gruesome and a beautiful horror story but it's message is what really digs inside your soul and almost makes reality a nightmare.

Check out the trailer. If any of you have seen it, I'd like to hear your thoughts.

Bradley Sands from Boston is reading Greil Marcus's The History of Rock 'N' Roll in Ten Songs November 1, 2011 - 2:21am

I appreciated it but did not enjoy it.

I had mixed reviews from a friend ("there's this scene where there's acorns falling on a roof and it's like...well acorns falling on a roof." to "...then there's so much fucked up sex violence and a deer with a half dead baby hanging out, a fox that eats itself and you have to see it because it's incredible but don't watch it!") and having seen the trailer when it was released I would really like to see it.
The thing is, I know it'll bother me, because since having a baby I've been kinda...hyper concious of anything involving kids, and the premise of the story is that their kid died, innit? I have a feeling that'll upset me more than anything else in the film.

Still, I have to watch it.

Joshua Chaplinsky from New York is reading Stories of YOUR Life November 1, 2011 - 5:14am

I'm a big von Trier fan, and Antichrist is one of my faves. I definitely understand that it's not for everyone, though. Chaos Reigns! 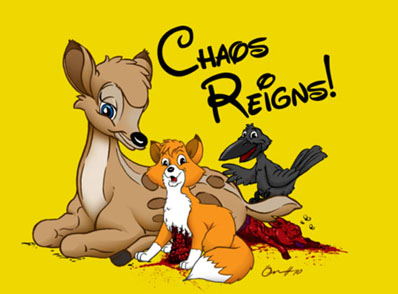 I'm a believer that he has some interesting things in his movies, but ultimately, a lot of it is shocking for the sake of being shocking.

Some of the imagery was beautiful and he explores some interesting places but in the end it didn't do much for me.

If you like Lars von Trier you should definitely check out Melancholia, it's one of the best movies I've ever seen. I also loved Antichrist, but Melancholia is out of the park. Charlotte Gainsbourg can act her ass off.

I pretty much agree with Bradley and Kirk on this one.

While I thought that the imagery was nice.  And he had a lot of cool symbolish.  I didn't really enjoy it or even like it that much.  I couldn't see myself ever watching it again.

Also - like Kirk said - some of the stuff in the movie seemed to be shocking for the sake of being shocking.

I will say this though - I hated the movie at about the halfway point - so I looked up some stuff online about it.  I found some discussions of the symbolism.  That helped me finish the movie without hating it.

I can't believe someone created a post about this movie! I've had some very heated debates about it.......

My theory when I saw it initially is that it's a man's response to the story "The Yellow Wallpaper" (Charlotte Perkins Gilman), and to the type of feminist discourse that tends to blame the men for women's psychological problems in a relationship. The story pretty much shows the mental deterioration of a woman (who happens to also have post-partum depression), due to her husband (a doctor) insisting on "treating her" in ways that actually make her worse, and also he imposes on the marriage the dynamic of "rational patriarch" versus "emotional woman," which drive her crazy at the end.

What the movie does is it reverses that and in fact blames women's craziness on themselves, as they try to regain control in their relationship if they feel that the men have in any way imposed their own control over them. The movie returns to the idea that woman is the root of all evil and she is the one pushing the man to violence because of her passive-agressive neuroses. In the end, he barely escapes the torture of living in a woman's mental chaos and makes it to some semblance of safety, but with more women lurking in a natural space (which returns to the old idea that women are by nature mentally unstable).

I think the movie sees nature in general as more feminine in nature, therefore chaotic and violent. The acorns are the tree trying to reproduce. She is scared of nature, but that's because she sees herself in it. The man gives in to woman's sexual needs and therefore is trapped in her chaos.That idea (of woman being the sexual predator) is as old as the Bible.

That's how I interpreted it at the time when I saw it, but I forget a lot of the details now.

Will check on netflix for it. Saw the trailer awhile back but didn't pay no mind now that people either love it or really hate it, it must be good.

Joshua Chaplinsky from New York is reading Stories of YOUR Life November 1, 2011 - 11:29am

That's a very astute interpretation. I like the movie even more now :)

Yeah, that was great. Sometimes I'm thinking things and I can't exactly spit them out. But you worded that very nicely. I completely agree with you. And the film had a lot to do with a womans guilt and acting on impulse, and the idea that "chaos reigns".

That's such an interesting thought though. That "Nature is Satans Church." After all it was nature in Eden, that got Adam and Eve to eat the apple, Satan came in the form of a snake. And that's the name of the forest where most of Antichrist takes place.

The idea that women are connected to nature is so beautiful and I've never seen it that way. Nature can bring beauty and peace and love to your life, but she can destroy you in a second.

One of the symbolic scenes I enjoyed in the movie are when "She" (Charlotte Gainsbourg) bolts the man-made wheel to his leg. One of the greatest inventions MAN has ever created. And it looked like it fucking hurt!

I always study a film. And I think the message Von Trier was trying to get across is so strong and so powerful it just comes over you like a wave. Even if you don't quite understand it, it leaves you a little uneasy after.

I read that he wrote that film in a severe depression. HA.

Typewriter Demigod from London is reading "White Noise" by DeLilo, "Moby-Dick" by Hermann Mellivile and "Uylsses" by Joyce November 1, 2011 - 12:34pm

Oh thanks guys. I do think it's a great movie even if I'm not so convinced by all of this commentary on women, but I get that von Trier was upsed about something at the time (most likely a woman). The reason why I brought up Yellow Wallpaper is that while watching the movie I realized pretty early on that he was referencing that story directly, and then it was fun to try to see what he was going to do with it. So if anyone wants to read the story and watch the movie after it, or in any order, you'll probably see what I mean.

I liked it far more than his latest film Melancholia, which pretty much made me want to rip my eyes out but if I'm be honest I wouldn't really go out of my way to watch a Lars Von Trier film. Just seems everything he does doesn't serve a much bigger meaning, but just what will get the audience more shocked or offended...that's my take on it anyway.

Joshua Chaplinsky from New York is reading Stories of YOUR Life November 1, 2011 - 4:07pm

Definitely recommend The Kingdom! My only quarrel is with the dishwasher characters who are supposed to reflect on the events and what's to come. I never saw how they added to the show.

Thank you guys! I just finished Melancholia and I think Von Trier is a new obsession of mine.

Both films are so beautiful. Next to each other. His themes are so big. The subjects he touches upon are so extraordinary. And the actors he gets are pitch perfect. I have a newfound respect for Kirsten Dunst.

I can't watch things like Antichrist. It was amazing, but it got to a point where I was too disturbed. Like Bradley said: Appreciated, did not enjoy.