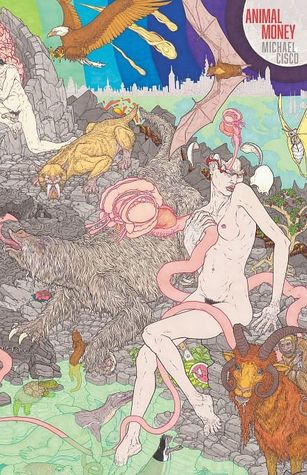 Synopsis: (The description of this on amazon.com and everywhere else was one sentence - A living form of money results in the unraveling of the world - so I had to "steal" this description from Jeff VanderMeer.)

Animal Money is “about” five economics professor who come up with the (surreal, radical) idea of animal money after meeting one another at the hotel of a conference they aren’t able to attend because they’ve all suffered coincidental injuries that require each to be heavily bandaged in some way. This bonds them as a group and a series of adventures ensue that include a weird zoo and a nudist beach. It’s written at a break-neck pace and in a style that’s very accessible. Cisco more or less piles brilliant set piece on top of brilliant set piece—and then in the most brilliant move the narrator begins to share space with narration by the other economic policy wonk academics and additional voices, at a point in the narrative where the reader has come to see them as one being anyway. All while Cisco also mercilessly skewers the world banking system and the peculiarly abstract world of money in general. He also manages to out-Clark Ashton Smith for Smith-like weird imagery, and certain sections are flat-out visionary and hallucinogenic in the best possible way.

Author: Michael Cisco is an American writer, teacher, and translator currently living in New York City. He is best known for his first novel, The Divinity Student, winner of the International Horror Guild Award for Best First Novel of 1999.

I've never read anything by Michael Cicso, but I've been seeing this book get a lot of hype. And Jeff VanderMeer's kind words about it really made me interested. I'm excited to see what everybody thinks as I think this one may be a weird one.

I will be fielding questions for Michael Cisco. Feel free to ask about this work as well as any others. <3 <3 <3