The Brick by Brick Method of Writing 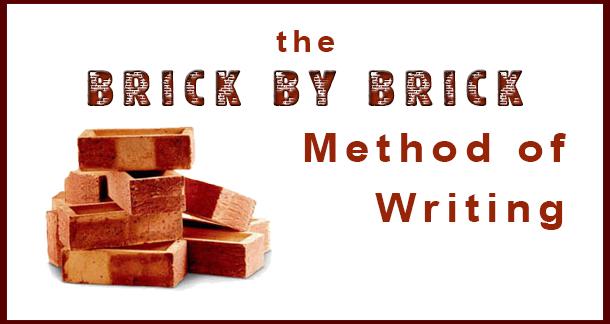 I spent a year and a half anxiously procrastinating work on my thesis. Then, after dozens of hours writing in a haphazard way that led to bloated versions of the project that I couldn't possibly finish, I implemented some ideas from the world of project management. By synthesizing these ideas with my own writing process, I was able to develop a method that broke past my anxiety and allowed me to build an 80-page thesis over the course of roughly three weeks.

I call this method the "brick-by-brick" approach to writing. It's nothing fancy; it's not incredibly innovative; it's just a few techniques I pulled in that happened to work wonders for me—both in pulling together my thesis and in a variety of smaller writing projects since. As such, I wanted to share the method with all you fine folks here at LitReactor.

The core concept of the brick-by-brick approach is simple: You start with what is absolutely necessary, refine that vital core, and then expand on it with whatever time and energy you have left. But let me jump into the details.

Start with what is absolutely necessary, refine that vital core, and then expand on it with whatever time and energy you have left.

The 5 Steps of Brick-by-Brick

The central thing to understand about the brick-by-brick method is that it's a way of prioritizing different parts of the writing process, especially for larger projects. That's why the first step is to ...

Keep in mind, this is not an attempt to describe how the project could meet your wildest fantasies. Rather, it's an attempt to look at what the core aspects of success are for a project. For my thesis, I needed to demonstrate the work I'd been doing over the prior three years, showcase the knowledge and projects I'd undertaken, and create something that I felt comfortable defending in front of a committee. For a novel project, the goals might be to keep the attention of the reader and have a richly developed lead who represents a specific set of values.

The point is to contemplate what the project needs to do rather than what it needs to say. What it says will come later, and each thing the written work says should be aimed at accomplishing the project's goals.

With the goals in mind, it's time to think through what the bare minimum version of that written work could look like. This outline is a way of thinking through your "minimal viable product" (or MVP), which is a term often used in developing large projects in the technology industry. (An excellent explanation can be found here.)

Your outline should be truly bare-bones. For a story, you might think of the major parts of the plot that need to happen: an inciting incident needs to happen, the protagonist needs to go off on the quest, and they need to confront the bad guy at the end. With the major points of these core elements down, you have your minimum viable product. Anything even remotely superfluous should be cut.

3) Write up and refine the MVP.

Rather than trying to brainstorm any other aspect of your final project, get to work on that core. Try your best to write the entire thing without deviating from the MVP; if you identify places where you may want to add something extra (like an example, link, anecdote, or relevant study), make a quick note of it, then get back to your MVP.

Remember: You can always add in more later if you have time. It's far better to have a thin but cohesive version of your whole story as opposed to a really-great-but-will-almost-certainly-never-be-finished version.

4) Evaluate your work and seek feedback.

One of the great advantages to this approach is that, fairly early in the process, it gives you something that can be evaluated and shared. If there are major problems with the story or characters, you can identify those issues before all of the work has been done.

It also helps defuse over-writing: I know I often find myself adding scenes or sections because I'm uncertain if the work will be effective. You're almost certain to find that the MVP version of the written work is not enough, but it's a lot easier for you or test readers to identify what's missing when you have a solid core.

5) Add in the extras and re-polish.

From here, you can start adding in the things you wanted to put in but weren't strictly necessary: Anecdotes, secondary characters, examples side-quests, quotes, world building details, and so forth. With your core in place, it will be easier to identify which of these aspects truly serve the project.

This order of operations means that, if something ends up getting cut out because you run out of time, energy, or affection for the project, the project will still survive. It also means that the pressure is off, and that freedom from stress often increases creativity.

I won't go too much into the advantages of the brick-by-brick method here. Some of you are better at handling large-scope projects than I am, and this sort of method may not be for you. However, I'm a person who struggles with anxiety—and this is a trait I've noted in many other writers, especially as I've gotten to know more writers through my work with LitReactor, local writing groups, and the Creative Writing Guild.

If you struggle when facing large projects, this approach may be worth a try. It picks up bits and pieces from project management, motivational psychology, and my own writing experience—and I hope it proves useful to at least some of you.

I might try this with my next project. As I tend to focus more on what I want my stories to say rather than the core approach in writing this.

Voreth's Promise Saga notwithstanding, even then I needed to know roughly the length of the book I wanted to do. Even if I later expanded it from 2,000 to 23,780 words.