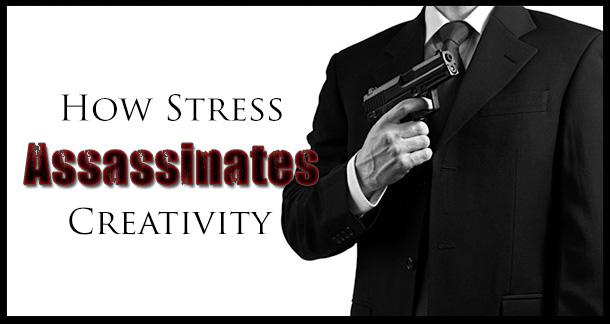 Is writer's block real? The answer depends on how you define "writer's block." So long as we don't assume it is some mythological disease out to damn poor writers, we can find reasonable definitions and solid answers on where writer's block comes from. The simple truth is that some situations make creativity more likely, while others make it almost impossible. The worst enemy of creativity is found in stress.

Whenever we're stressed, the brain reallocates resources to the primitive parts of the brain, prioritizing primal emotions over abstract thinking and motor control over creativity. When we get behind the barrier of stress, we're locked out of the creative part of the brain at a basic neurological level. This article will explore why and how this happens and provide a bit of scientific backing for the interplay of creative thinking and stress.

This ancient part of the brain is simple, vital, and—when it comes to creative tasks—sometimes problematic.

For those of you who've never studied the brain before, let me give you a quick (and wildly oversimplified) primer. Throughout human evolutionary history, the brain developed new functions—but rather than discarding the old brain functionality and starting from scratch, it built the new layers on top of the old. As a result, we're left with three sections of the brain that seem to function according to entirely different rules.

The most recent leap forward is the neo-mammalian brain, which houses our linguistic abilities and the capability for abstract thought. The ability to write and organize language, and to make intuitive leaps based on the combination of abstract ideas (e.g., envisioning characters in our head and imagining what they would say) require this part of the brain.

Then we have the mammalian brain, which includes most of our advanced emotional systems. Outside some primal emotions (like aggression and arousal), the limbic system of the mammalian brain houses our feelings and much of our sub-linguistic creativity.

And then we have the reptilian brain, which houses our most primal impulses, basic body maintenance, and (importantly) our stress response. This ancient part of the brain is simple, vital, and—when it comes to creative tasks—sometimes problematic.

(Want more details? Check out this hunt for the creative space in the brain.)

Whether the threat creeping up on you is a wildcat or a deadline, the brain responds in the exact same way.

When life is good and we're not feeling threatened, humans are able to tap into the resources of all three of these brains—but what happens when resources need to be reallocated? Put simply, parts of the brain will "close off" so other portions can get more resources.

Given that these layers of the brain developed in a world where most "threats" wanted to eat you, it only made sense to shut off complex thinking, focus the resources of the brain on motor skills, and otherwise prepare for fighting or fleeing. You know how anxiety makes your heart beat faster? That's definitely not designed to help you write more effectively: The extra blood flow is meant to help improve your odds against predators.

In a world where most threats were physical, diminishing the reptilian brain's resources would be like shutting off your car's engine so the AC could work better. Complex emotion, creative impulses, rich abstract thinking, and the ability to form language are all nice tricks—but they're optional when compared with the core functions of the brain.

Alas, modern life isn't so simple as a tooth-and-claw battle for survival. Worse, our brains don't seem to realize that. Each human brain seems to have a sadly misinformed gatekeeper who scans the environment for threats and decides how resources are allocated—and whether the threat creeping up on you is a wildcat or a deadline, the gatekeeper gives the exact same solution.

There have been mixed results in studies on stress and creativity, with some lab-based studies finding no difference when adding stress to activities. However, most of these "no difference" studies are influenced by the definitions of creativity they use, the tests used for creativity, the variance of anxiety thresholds for participants, the intensity of stress required to trigger a creative block, and the difficulty in manufacturing such high-stress situations in a lab setting,

More recent research on divergent thinking and creativity has been yielding more consistent results. Shawn Achor's book The Happiness Advantage cites multiple studies that find being happy leads to higher performance on creative tasks than either stressed or neutral states. As noted in my article on writing drunk, altered states have been found to increase creativity by decreasing stress and anxiety.

Examinations of real-world settings led to similar conclusions: A look at creativity in business environments found that higher stress meant lower creativity. This study also found that individuals higher up in the company's hierarchy were likely to exhibit higher creativity, which may be more about experiencing lower interpersonal and organizational stress than it is about earning their position through creative thinking.

Another study looked at over 9000 daily journals of participants to try to determine what environments were most likely to facilitate creative thinking. While some high-pressure situations still led to creative outcomes, those instances were rare. High stress and pressure tended to kill creativity; the exception was when there was a narrow scope and a high sense of meaning in the tasks being accomplished. While participants in low-stress environments sometimes went into an uncreative autopilot, lower stress tended to lead to higher levels of creative thinking.

Then there's the famed study which found that higher rewards led to lower performance in creative and analytical thinking tasks, though performance increased as rewards increased for rudimentary tasks (such as those that only require increased motor skills).

Knocking down neurological barriers is complicated, and deserves a full follow-up article. In the meantime, my previous article on outsmarting writer's block provides some basic tips.

What's your experience? What works for you? How does stress influence your creative thinking? Do you feel you work better under the gun or in free form? Or is there a happy medium?

Also one thing that helps: Don't watch a depressing movie when your getting ready to write. It sounds like common sense, but there is no telling how many times my aunt wants to go to a movie that turns out not like what she was expecting. Taking me out of the writing routine. I need to be in a happy mood to write depressing stories. (Yea hows that suppose to work?:P)

I agree, there’s no such thing as writers block per se

eirikodin from Auburn, NY is reading Mediterranean Caper by Clive Cussler April 12, 2014 - 10:55am

I find a form of stress of the job to increase creativity, in a sense.  I spend the day finding problems with machinery and correcting them, sometimes I get creative; not always a good thing.  So when I'm at work, on the ship, I find myself writing less.  I also find my self-editing skills increasing.  I guess through stress I have improved upon another writing skill.  I guess this comes from day after day of finding things that are wrong and out of place and I have somehow managed to apply this to writing.

Can't wait to get home so I can work on new material.

Roger Kilbourne from Massachusetts is reading The Word Exchange November 5, 2014 - 11:53am

I knew there was a good reason why my...ahem, herbal medication...helped the words flow!

Stress, depression and anxiety all the terms are responsible to kill our creativity; therefore professionals and career oriented persons are unable to develop their creativity with due to stress and depression. Here also we can get some example on how writes are using their creativity to produce good contents and they are also suffering from stress and struggling to write good stuffs.