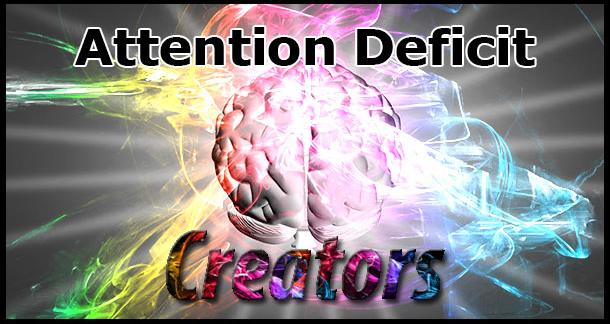 Back in July, I took a two-month break from all my obligations. I was quitting a powerful, prescribed amphetamine, and since my previous two attempts to quit had been disastrous, it felt important to leave myself ample space to land as I made this third attempt. I've successfully gotten off of the medication now, but now have to cope with what the meds were designed to remedy: Life with an attention deficit mind.

Since July, I've had plenty of time to think about attention deficit disorder, examine its various tendencies, look at its peculiar advantages, and struggle against the ways it makes my chosen life a fair deal harder. In leading community discussions and teaching occasional classes over the last few years, I've also come to notice that "being creative" and "being attention deficit" are practically synonyms. As such, I'm hoping many of you will benefit from my thoughts on attention deficit disorder, creativity, and the way to reap the benefits while dodging the land mines.

What the hell is ADD anyway?

If you're confused as to what ADD or ADHD mean, you're not alone. In fact, in the thirty or so years since the disorder was formally introduced, there have been ongoing debates about the qualities, validity, appropriate treatment, and specific definition of attention deficit disorder. You may already be aware that there are those who believe this diagnosis is "fake."

Well, no psychological diagnosis is "real." A diagnosis does not point to some universal, essential reality. Luckily, the diagnosis isn't aimed at fundamental realities but at practical ones. Any psychological label is useful inasmuch as it helps us test potential solutions: It gains substance when the term, and the tendencies it describes, are empirically tested in valuable ways. No two people are the same, and diagnoses can be applied well or poorly. Any diagnosis follows a cartography of personality that gives us loose guidance at best. That said, ADD is a potentially useful, though certainly not unproblematic, diagnosis.

So what are the traits of ADD/ADHD? Most commonly, ADD/ADHD is seen as a difficulty focusing (along with the tendency to sometimes hyper-focus), a preference for seeking high-stimulation activities, and a high degree of impulsivity. From the neuroscience perspective, this is correlated with lower levels of activity in areas of the brain typically associated with "executive control."

That said, these traits don't signal that there's something inherently wrong with a person. My favorite discussion on the topic is one I encountered in Dr. Lucy Jo Palladino's foreword for The Edison Gene. She wrote:

I use the term ADHD technically to describe a specific diagnosis and thereby signal that a problem is serious enough to treat. [...] I have met hundreds of [ADD tendency] children and adults who don't have ADHD; because their problems with inattention, impulsivity, or hyperactivity do not interfere with their daily lives, they do not qualify for an ADHD diagnosis. In diagnostic terms, interference with daily living is the critical line that separates personality and pathology. People with ADHD may move back across that line when they adapt their environment or their environment adapts to accommodate them.

In other words, ADHD isn't merely being hyperactive, impulsive, or having trouble focusing. Rather, it's an incompatibility between these specific traits and the sort of life a person is trying to lead. I have strong opinions about who's to blame, but I won't go into that here. Instead, let's focus on how this all applies to "creative types."

In following the creative writing education provided by the traditional, academic path, I've encountered many people who have ADD, some of whom have a specific diagnosis and others of whom display prominent tendencies but have never been labeled. As I've stepped away from medications and discussed my struggles with fellow writers, I've been surprised—and perhaps a bit saddened—to hear just how widespread these struggles are. I've noticed that many writers share the struggles of finishing tasks, staying on topic, completing assignments in a timely manner, staying focused, keeping organized, and so forth.

Why is this? Well, one possibility is that attention deficit people are drawn to creative writing. Writing, after all, seems to be an attempt to legitimize daydreaming and make a profession of it (as we well should). There are also more than a few studies that have demonstrated a link between ADD and creativity. An explicit link is hard to make because we lack a universally agreed upon definition of creativity and have not yet developed effective ways to test creativity, but certain creative traits (such as divergent thinking and spontaneous ideation) have been shown to be more prominent in ADD individuals.

There are plenty of famous attention deficit creators out there. Since the diagnosis is fairly young, there aren't too many famous creators with an official diagnosis. However, an unofficial diagnosis has been provided in cases where historical documents demonstrate evidence of ADD tendencies. Among the many famous creators with ADD, we find Albert Einstein, Jules Verne, Thomas Edison, Agatha Christie, Mozart, F. Scott Fitzgerald, Leonardo da Vinci, and George Bernard Shaw.

We shouldn't be surprised to see so many writers on the list. If you're more likely to seek high stimulation and let your mind wander, writing certainly holds a great appeal. And if you want to be a successful writer, you'll likely benefit from the increased creativity that seems to come along with ADD.

How to Focus, How to Finish

I wish I had better advice for those looking to improve their writing habits in the face of these ADD tendencies, especially if you (like me) want to avoid stimulant medication. For me, the interest in psychology began with an attempt to overcome that exact hurdle. Over the years when I faced this struggle without medication, as well as the last three months, I've found a few helpful interventions:

More than anything, the last few months have helped me recognize the importance of choosing my situations and environments with care. Any time I have to focus, meet deadlines, or complete large projects, I know I'll be facing an uphill battle. As such, it's crucial that I care enough about the project that the battle is worthwhile.

What about you? What are your experiences with ADD and creativity? And what do you do (outside of medication) to help yourself focus on the task at hand and follow projects through to completion? I'm eager to hear what you've learned.

I was diagnosed ADHD as an adult at age 25. I honestly had difficulty holding down a full time job, or even existing as an adult. 3 years of Adderall/therapy later, I have a book published, a few comic book projects in the works and a ft job.

Aside from the pills, the music thing is a life saver, plus now I don't have to answer phones.

Thanks so much for this... I've always thought I was just shitty at staying focused, but lately it's gotten worse and has become a real problem. Like a zero-productivity-while-my-agent-waits-for-the-next-novel kind of problem. I'm just now looking into ADD/ADHD and how to deal without meds, and this article was a real boost. Thanks again, Robbie.

Redd Tramp from Los Angeles, CA is reading Mongrels by SGJ; Sacred and Immoral: On the Writings of Chuck Palahniuk; The History of Sexuality by Michel Foucault October 29, 2014 - 3:36pm

This is genius. Thank you for writing this. I've dealt with ADHD since I was a kid. Initially, they had me on Ritalin, and while that helped me focus on getting shit done, it gave me terrible anxiety at an age when I didn't even know what anxiety was. And quirks, weird little habits some of which I still deal with. I stopped, and haven't taken Ritalin in years. A lot of people are so quick to dismiss it, ADD/ADHD, and it can be really difficult to explain to someone the way my brain works. It's always going, always moving, always finding and looking for patterns, but, often before I can dwell on any one line of thought for too long, some other thing wriggles in. I start activities and then start other activities and then other ones before finally remembering to go back to the first. It's weird, I'm a scattered person, always in my head, but my brain works SO fast. I can read insanely fast, write fast too, but only when whatever it is really piques my interest in some way. I can't help but procrastinate, tap my foot almost all the time, drum my fingers, mess with my hair, pick at my skin when I'm nervous, and I'm nervous a lot. I could go on and on and on. Reality often feeling kind of fake and far away, little pinpoints of light that swim in my peripheral vision like bugs or atoms or static, sometimes my thoughts feel like they're screaming at me, etc. Oh, and I'm totally addicted to coffee. Caffeine makes things feel more...structured.

But anyways, I totally agree on the physical activity. After I work out and I'm exhausted, I feel great. My anxiety goes way down, the buzzing in my head quiets, and I feel good in my body. I also smoke pot, which weirdly helps a lot, but not always, and not always for long. I've read and heard how ADHD kids often gravitate towards weed use because it has a focusing effect on them. A few times, back when I was doing harder drugs, I popped some Adderall, and that made everything feel so right. Until I got jittery and couldn't sleep for like 3 days.

Sorry for writing so much. I can't believe I found a column on here about this. Again, thank you for writing this Robbie. You write some pretty amazing, helpful stuff.